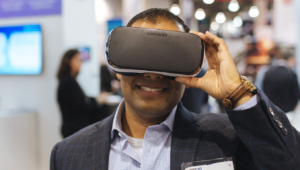 The breakout success of the Pokemon Go app has boosted public visibility of augmented reality (AR) and virtual reality (VR) technology. Using AR, the gaming app superimposes Pokemon images over the real-world sites where users point their phones, bringing its fantasy world to life. Businesses of all kinds, including hotels, are racing to discover innovative new ways to use AR as well as VR, which fully immerses users in an imaginary world, to attract and entertain guests.

The buzz may also help draw more attention to current hotel projects in AR and VR marketing, entertainment and related hotel industry trends. For example, this summer also marked the expansion of the Best Western Virtual Reality Experience to all the brand’s North American properties. The Best Western project creates 360-degree videos of its properties that can be viewed online or more immersively on a VR headset. The idea is to allow potential guests to experience each property’s rooms and amenities virtually online, driving bookings by impressing them with the chain’s new look.

To tap that interest, hotels are also leveraging VR as entertainment. In a 2015 pilot project, Marriott’s VRoom service loaned guests Samsung Gear VR headsets for 24 hours to virtually travel alongside a guide to three exotic locations, served up via Samsung’s VR platform. The VR content is now available online while the brand evaluates results.

Hotels are also testing AR, which lends itself well to personalized wayfinding, highlighting destinations inside or outside the hotel based on the guest’s itinerary or interests; bringing signage and virtual brochures to life; or offering menus that display images of dishes or translations for non-English speakers. Holiday Inn created a form of augmented reality with pre-recorded videos that allow a guest to “see” sports stars around the hotel. AR experiences can be delivered via an app on a mobile phone or tablet, or using a special pair of glasses.

These brands aren’t the only hospitality firms already underway with AR and VR marketing and entertainment projects. According to Skift, Shangri-La Hotels and Hilton are also among those leveraging VR for marketing, while Carlson Rezidor Hotel Group uses a VR-enhanced app to educate investors and developers on the design process for its Radisson Blu hotel brand.

Looking to the Future

But these are still early days. Deloitte calls 2016 a “year of experimentation,” as businesses test ideas and discern which ones add value and attract consumers. They must also ensure they have the infrastructure and know-how in place to create and manage compelling content, particularly at scale. Most forecasters expect the biggest impact to come down the road, as VR technology finds its place.

Future-casters such as Faith Popcorn paint a dazzling picture of the role VR will one day play in hospitality. In a study commissioned by InterContinental Hotels & Resorts for its 70th anniversary, Popcorn said, “Consumers will be craving immersive experiences which will allow them to indulge in luxury in both a physical and a virtual sense. By harnessing virtual reality and the constant flow of personal likes, dislikes and bio-data, hotels will be able to provide guests with once-in-a-lifetime experiences seamlessly and spontaneously — or so it will seem,” according to Travel Weekly. Popcorn also envisions guests using VR to send a virtual postcard to their families back home or experience extreme adventures without the danger. Hotels may even use VR to create virtual interior design throughout their properties.

To get there, though, hotels will need to take a (virtual) crawl-walk-run approach. Paying close attention to emerging VR marketing and entertainment best practices and related hotel industry trends will be key to spending VR dollars wisely.

But if the runaway success of Pokemon Go is any illustration, getting AR and VR technology right can create the kind of engagement and buzz that every hotel CMO craves.

Virtual reality also offers fans the opportunity to immerse themselves in live events, from sports games to concerts, simply by putting on a headset.