Digital transformation is being adopted by retail banks across their product offerings, providing startups and other newcomers with a chance to steal away customers and their most profitable services. In order for banks to keep up with the competition, they must embrace the digital revolution by giving customers options like automation, robo-advisors and mobile banking.

“The rise of digital innovators in financial services presents a significant threat to the traditional business models of retail banks,” according to a 2016 McKinsey & Company report. “Technological advances and shifts in consumer behavior offer attackers a chance to weaken the heavy gravitational pull that banks exert on their customers.” The report says that the customers most vulnerable to being cherry-picked by new competitors such as FinTechs are millennials, small businesses and consumers who lack things like checking accounts and are considered underbanked. According to the report, these three groups are most sensitive to costs and open to digital delivery and distribution.

In 2012, Bain & Company predicted the digital challenge that retail banks would face in the coming years, stating that many established banks were hobbled by out-of-date institutional and cultural mindsets that would make the transition to digital services difficult. “Focused more on processing transactions than innovating around the customer experience, retail bankers have been slow to weave new customer-facing technologies into the core of their operations,” the report said. However, it’s imperative for banks to redirect their focus to incorporate digital technology into their customer service strategy to keep up with consumer demand. Here are three steps banks can take to begin the digital transformation process.

Mobile banking apps are on the rise, and many banks are taking advantage of this trend to enhance their customer service. For example, in its third quarter 2016 earnings presentation, Bank of America said that 20 percent of its total sales were digital, and 27 percent of those sales were over mobile devices. The bank reported that it now has over 21 million mobile customers.

Other large banks are also scrambling to adopt mobile apps and reap the benefits they bring, such as using smartphone fingerprint readers to verify customer identification and add their credit cards to mobile phone payment systems. Other functions make it easier to move money among customer accounts. Banks need to embrace mobility now to catch up to startups, rather than attack established banks head-on, FinTech firms have identified narrow sectors where they can compete, often because they face less regulatory pressure than banks.

To fully embrace mobile, banks need to properly manage and secure their mobile devices and apps with a mobile security platform that separates work and personal data, offers multilayered hardware and software security, and integrates with mobile device management (MDM) systems that can speed transactions and quickly offer new services to clients. 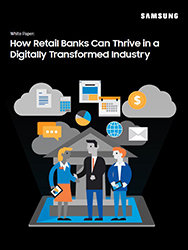 2. Learn From Startups and FinTechs

One example of how FinTech firms have moved into the traditional business sector of retail banks that have failed to fully digitize finance operations is in the area of payments. It started with PayPal, which was founded in 1998. Since then, peer-to-peer payment apps such as Alipay and Venmo have joined the fray. Certain applications, such as WePay, are geared toward small businesses seeking to make payments to other companies.

One lucrative payments function banks are already losing is in foreign currency transactions. New companies such as TransferWise and Xoom promise to do foreign transfers for less than 10 percent of the charge levied by banks.

In order to remain competitive in the rapidly changing world of finance, banks should learn from the way these startups and FinTechs have embraced digital innovation.

According to a recent study by Bain & Company, traditional banks have failed to completely digitize finance operations and can only completely process 7 percent of loans digitally, while FinTech competitors can offer end-to-end servicing. “FinTechs also are creating new models to make lending decisions, source capital and service loans,” the Bain study said. “Often, they can offset at least some of the scale benefits of large banks with simpler digitalized processes.”

In order for traditional banks to keep up, they must looks for ways to automate workflows, such as through artificial intelligence solutions. By digitizing information-intensive processes through methods such as automated decision-making, McKinsey states that organizations could cut costs by up to 90 percent, and turnaround times could be “improved by several orders of magnitude,” resulting in increased productivity and customer satisfaction.

Retail banks must think about ways to digitize finance operations in order to catch up to FinTech firms and enhance their customer satisfaction rates. Fortunately, if they embrace mobility, learn from innovative startups and look into ways to automate their processes, they’ll be well on their way to becoming active participants in the digital revolution.

Looking for more exciting technology for the finance world? Explore our full line of FinTech solutions.