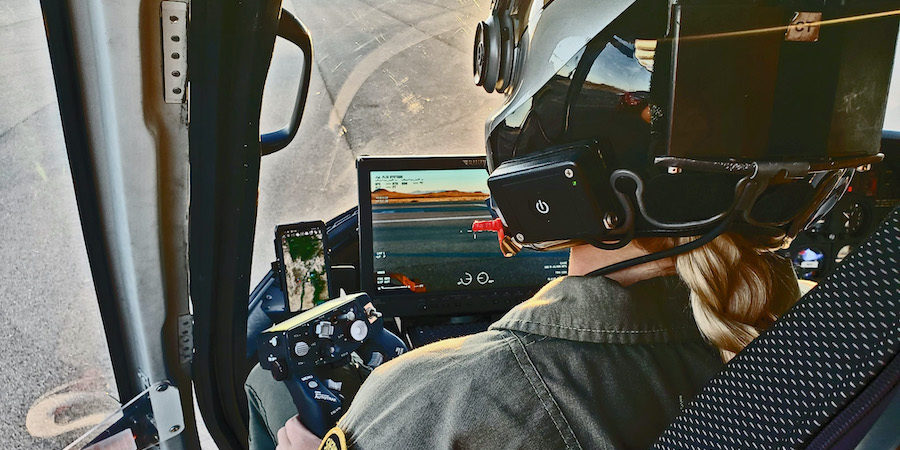 Editor’s Note: To learn more about ATAK and its use by Bernalillo County Sheriff’s Department (BCSD) for search and rescue operations, watch a recording of a recently presented webinar. Speakers include Undersheriff Larry Koren from BCSD and David Tally, Director of Applied Technology at PAR Government.

In Bernalillo County, New Mexico, the Sandia Mountains are a popular destination for hikers and rock climbers — but sometimes they get lost or injured, and then it’s the responsibility of the Bernalillo County Sheriff’s Department (BCSD) to coordinate the rescue. A key element of this response is the BCSD Metro Air Unit, commanded by BCSD Undersheriff Larry Koren, who is also the unit’s senior pilot. Koren says his agency’s use of Android Team Awareness Kit (ATAK) on their Galaxy S20 smartphones has dramatically increased their rescue mission success rate by improving information sharing and situational awareness.

Knowing the specific, real-time location of the person being rescued and of each responder is key to mission success. In Bernalillo County, ATAK has dramatically improved communication and coordination across multiple public safety agencies.

ATAK was originally developed for military special operations by the U.S. Air Force Research Lab in 2010. Now available in a civilian version, ATAK is a collaborative mobile app that tracks team member locations in real time and facilitates data sharing for photos, videos and secure texts. The app allows data to be layered, so during critical incidents, users can share mission-essential information — including real-time camera feeds. For field personnel, ATAK can serve as a powerful command center, providing dramatically enhanced situational awareness and operational capabilities.

Koren, who has participated in more than 500 search and rescue missions, was the driving force behind BCSD’s adoption of ATAK. “We were having an issue with ground crews during both wildland fires and search and rescue missions,” he explains. “We would be flying over an area and there would be personnel that we couldn’t see under a canopy of ponderosa pines. Sometimes we would have three separate crews looking for an injured hiker, and it was really difficult to coordinate their efforts. Everything was a visual reference, but that just doesn’t work when you can’t see the crews. ATAK has changed that.”

Before ATAK, BCSD’s rescue mission communications were subject to significant lag time and errors as crew members exchanged information over many phone calls. “With ATAK, communication is streamlined,” Koren says. “Everyone can see key information like the designated LZ [landing zone] or the staging area for the ambulance. It keeps everyone on the same page.”

For example, air crews can fly over an area and transmit an aerial view of terrain to their counterparts on the ground. “This helps them prepare in terms of equipment and the approach that will be needed,” Koren explains.

Koren provided this real-life example of an ATAK-equipped rescue mission: “An experienced rock climber fell off a cliff in the Sandia Mountains. She sustained severe injuries — multiple broken bones with the potential of bleeding out. We were able to get exact coordinates quickly using an SOS token and shared that information with the ground crews, then used ATAK to coordinate with those crews when we were overhead.

“It was very treacherous terrain at an elevation of 9,000 feet, but we were able to quickly get ground personnel to the patient, then insert a paramedic who packaged the patient in a litter basket. He attached the helicopter’s rope, and we moved her to the staging area where the ambulance was waiting.” BCSD has compiled a short video with some footage of the rescue.

The “SOS token” — developed by PAR Government, which served as ATAK’s lead developer — is a text message with an embedded hyperlink that BCSD pushes to a caller’s smartphone. The message instructs the caller to click on the link if they need rescue assistance. When the link is clicked, BCSD gets the caller’s specific location, and their coordinates are immediately integrated into the ATAK-facilitated operation.

The search and rescue efforts in Bernalillo County involve agencies other than BCSD, which means that some responding personnel may be operating on a different frequency or may not even have a radio available. ATAK leverages cellular technology as a common denominator. “It gives me peace of mind that the other personnel involved in this rescue network have the same level of awareness during a rescue,” says Koren.

Due to recent legislation in New Mexico, all law enforcement agencies are now required to implement a body-worn camera (BWC) program. “Through my exposure to ATAK, I feel the technology could be utilized [with the BWCs],” says Koren.

BCSD intends to combine its BWC rollout with smartphone deployment for all sworn personnel (BCSD currently uses about 150 smartphones, but the agency has 329 sworn personnel). Their current plan is to use a smart device as a camera and pair it with each officer’s smartphone. Koren expects this approach will establish a strong foundation of technology — which the department will be able to update with additional applications and capabilities as needed.

Get expert, practical advice for your public safety mobile deployment so you can be both connected and compliant with Criminal Justice Information Services (CJIS) regulations. And discover how ATAK is also being used to coordinate remote firefighting operations.