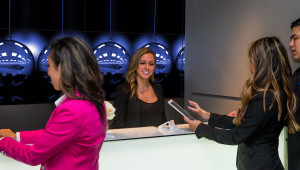 Imagine checking into a hotel that has no staff — just technology running the operation. It would be cold and impersonal, not to mention frustrating when you had a question. On the flip side, consider the amenities, services and efficiency that would be gone if hotels stopped using tech all together. The sweet spot lies in marrying technology and human interaction, but businesses in all industries, including hospitality, struggle with finding the balance between technology like hotel automation and the human touch. Many hotels find that the best solution combines both tech and personal interaction in the same experience.

Accenture’s B2B customer experience research findings show that investing heavily in both digital and legacy channels is one of the top six characteristics of “Leaders,” which were defined by researchers as very high-performing companies with high financial value. The study uses the term “legacy” to refer to traditional channels such as customer service and the call center, as well as training and tools such as the CRM system for these channels. Researchers also studied “Strivers,” which were defined for the report as companies falling short in some way either strategically or financially but which were in much better business shape than “Laggards,” which were the bottom 20 percent.

When asked whether digital channels and technologies will significantly improve their interactions with business customers, provide new sources of revenue, engage employees and partners more effectively, and help them reduce costs, Leaders strongly agreed more often than Strivers did. Interestingly, Strivers invested in an average of only two new areas of tech compared to the seven noted by Leaders, with Internet of Things technology being most popular, with 48 percent of Leaders increasing spending in this area.

Interestingly, Leaders are increasing their investments in traditional channels at a quicker pace than Strivers and are focused on integrating both technology and human interaction into the customer experience. According to the report, “As a result of this dual focus, Leaders have developed a very clear ‘digital-physical’ vision tuned to the multi-speed customer agenda and tracked rigorously. They have a clearly established view of how traditional and digital interaction channels should be integrated, and systematically measure the return on their investment in digital as well as in other initiatives.”

Best of Both Worlds

Hotels are beginning to follow advice from Leaders by using staff aided by technology to help facilitate customer experiences. Here’s an example of a customer journey at a hotel that blends tech and personal service:

It’s a natural inclination to automatically think that more tech is better, but in today’s digital world, people value human interaction even more. If you take the time to thoughtfully and strategically blend both technology and human interaction into as much of the guest experience as possible, your property will provide a level of service not found in others, and your guests will quickly begin returning for future stays.

Learn more about technology solutions for the hospitality industry and how they can enhance the guest experience.