CDN Storage Solutions in the Era of 8K Streaming

Data storage hubs for delivering streaming video content to consumers have ramped up enormously in capacity, throughput and access speed over the past few years.

From the earliest days of digital video through today, there has been a steep and steady increase in the size of video files by orders of magnitude, from hundreds of kilobytes to megabytes, and now to gigabytes.

This exponential growth is due to a combination of three factors: the number of pixels per frame of video, the number of colors in each frame, and the number of frames per second (fps). And as file sizes expand, content delivery networks (CDNs) that transmit these videos to end users have had to keep pace, increasing their storage capacity by the dozens — without bloating costs or sacrificing performance.

With 8K video on the horizon, this rate of growth shows no signs of slowing, and older storage solutions used within CDNs will be straining to keep up. Fortunately, there are some new kids on the block poised to help out.

Video Standards by the Numbers

In the late 1990s, most video content was at or below the videocassette level of quality, with 120p and 144p at the low end, 240p and 480i more common, and high resolution content reaching 480p. This translates to 144×256 pixels for 140p, 120×160 pixels for 120p, and 240×320 pixels for 240p. The “p” stands for “progressive scan,” meaning that all the lines of each frame are displayed in sequence. The “i” in 480i means “interlaced,” with alternating lines being displayed each sequence, so that two sequential frames are necessary to display all the information (but only half the frames need to be delivered at one time).

The number of colors displayed might be 24-bit, with 8 bits per color for red, green and blue, or a lower number like four or six bits per color, which resulted in visible banding of colors, but saved space. Meanwhile, 24 fps is what you’ll get from a standard film projector in a theater, and many films on DVD are shown at this rate, because it’s closer to the theatrical experience. 30 fps is standard for television, while 60 fps is still relatively uncommon.

Calculating the total amount of data needed to store a single pixel is more complex than these numbers might at first seem to indicate. Going from 480i to 480p doubles the amount of data being stored. Going from 240p to 480p, on the other hand, doesn’t double the pixels — it quadruples it, assuming the number of colors remains constant.

These relationships can quickly get confusing, as there are really three standard frame rates: progressive scan, at 60 full frames per second (60Hz); interlace, showing half the lines each 60th of a second for an effective frame rate of 30 fps (30Hz); and film, typically 24 fps.

Therefore, the newer higher-resolution standards don’t just double the storage needed: 4K is four times the size of 1080p, and 8K is 16 times the size — not counting additional color information for HDR video! 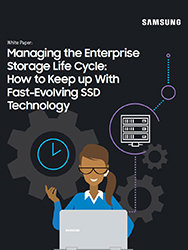 Data storage capacity is all the more pressing because, for many content providers, video is stored at the highest resolution available, and then downsized for delivery to lower-resolution devices. So even though 8K isn’t currently supported by existing video disk standards, as it becomes more generally available for sports and other live events, all the nodes in a content delivery network will need to support the higher resolution.

With that in mind, upshifting to 8K – or 4320p resolution – represents a massive exponential explosion in the storage needs required to hold and stream these videos, with 16 times as many pixels as conventional Full HD video. 90 minutes of raw 8K footage will average as much as 18,000GB — 18 terabytes for a short feature film.

This has, not surprisingly, forced video streaming companies like Netflix to find some creative solutions for storage and delivery of such massive file sizes.

Since CDNs place their servers as close to end users as possible, the servers must be compact, low cost and able to operate in the confined space of network points of presence in locations that may have limited power and cooling. Since most CDNs use hundreds or thousands of servers to deliver their content, cost is a major issue, though the systems must also be reliable, since end users often have multiple options to get content and won’t tolerate poor performance.

Some CDN operators have tried to cuts costs by using consumer-grade SSDs in their servers. The initial performance was acceptable, but since these drives are designed for a home/work PC environment with short random read and write bursts, they degraded over a few months. The results were drive failures that weren’t covered by warranties due to the heavy 24/7 operation loads placed by the servers.

In response to this need, the Samsung 860DCT was engineered to meet the demands of CDNs, combining the V-NAND technology of Samsung’s consumer drives with an enterprise-grade controller and software, allowing the drive to operate at full speed over long periods without errors. The drives are high density and reliable, with low power consumption, strong data security and proactive monitoring, with a three-year limited warranty — even at 24/7 use.

As video quality moves from 1080p to 2160p to 4320p, the 860DCT is an ideal fit for CDN streaming storage. With low power requirements, the ability to operate at up to 83 degrees centigrade, the reliability needed to deliver content over years of life, and the performance to handle even high resolutions, the 860DCT should be on the short list for anyone running or developing a CDN system.