How to create a mobile-first hospital

Get your free guide to modernizing clinical communications with smartphones.

Brain health has been a hot news topic in recent years, particularly as it relates to concussion and dementia. Yet there have been no objective, reliable tools to track cognitive decline in aging adults, to manage the recovery and treatment of a concussion or to determine when the 2.5 million student athletes who get a concussion each year can safely return to play. Quadrant Biosciences wanted to change that by developing digital, data-based solutions to longitudinally track cognitive function, balance and patient symptoms.

Working with medical researchers from SUNY Upstate Medical University, Quadrant Biosciences developed the ClearEdge Brain Health Toolkit — an FDA-compliant solution that combines clinical best practices, cloud-based analytics, and mobile computing. Patients use a tablet to complete cognitive testing and wear a proprietary Bluetooth-enabled sensor that evaluates balance and feeds that data back to the tablet. The ClearEdge solution runs on a Samsung tablet, which enables Quadrant Biosciences to standardize testing and ensure reliable results.

In 2017, 15.1 percent of school-aged Americans — roughly 2.5 million kids — reported having at least one concussion the previous year, and 6 percent reported two or more.

ClearEdge helps physicians objectively diagnose concussions and determine when players are truly ready to return to play. Physicians report greater patient and parent satisfaction, because they can provide data and objective answers to questions about concussion diagnosis and prognosis. ClearEdge is also being used in senior care facilities to track cognitive decline and increased risk of fall, because falls increase the mortality risk for seniors and cost the U.S. healthcare system $50 billion a year.

One of these key technologies, the ClearEdge Brain Health Toolkit, was developed in cooperation with SUNY Upstate Medical University and supported through private and state funding. ClearEdge is FDA-compliant and currently available in the market. Quadrant Biosciences is also collaborating with SUNY Upstate Medical University, Penn State University and several other institutions to develop saliva-based biomarker technologies to aid in the diagnosis of autism spectrum disorder, concussion and Parkinson’s Disease.

Quadrant Biosciences is a brain health partner for the Hall of Fame Player’s Foundation, U.S. All Star Federation for Cheer and Dance, and the USA Olympic Field Hockey team.

Six years ago, retired Wall Street executive Richard Uhlig watched his youngest son sustain a concussion during a hockey game. Throughout his son’s recovery period, Uhlig realized the diagnosis and management of concussion relied almost entirely on the physician’s subjective assessment. He was surprised that even in the digital age, objective, reliable diagnostic tools for such a serious brain injury were sorely lacking.

Concussions are not uncommon in school athletes. In a 2017 survey by the Centers for Disease Control, 15.1 percent of school-aged Americans — roughly 2.5 million kids — reported having at least one concussion the previous year, and 6 percent reported two or more.

Uhlig studied biology at Cornell University before beginning his banking career, so he dusted off his scientist hat and quickly consumed 20 years of literature on concussion. Then he formed Quadrant Biosciences and enlisted the help of concussion specialists at SUNY Upstate Medical University to begin developing a digital, data-based solution to identify and track concussion.

“The likelihood of a second concussion or orthopedic injury increases as much as three times following a concussion,” explained Chrys Chrysanthou, president of Motion Intelligence at Quadrant Biosciences. “When you look at athletes who have sustained life-threatening injuries, paralysis or even death due to concussion — it’s usually a second, third or fourth concussion. Because the risks increase dramatically with multiple concussions, we need a way to be more definitive about returning somebody to a risky situation.”

Concussion isn’t the only condition that affects cognitive function. As the team at Quadrant Biosciences quickly realized, their concussion assessment could have far-reaching implications.

“Rarely does a day go by without a major media outlet publishing something on concussion, dementia, Parkinson’s Disease, ADHD, PTSD or some other neurological condition that’s on the rise,” says Chrysanthou. “Something like one in four people will suffer some sort of cognitive impairment in their lifetime. Yet there hasn’t been an effective way of tracking brain health. When you go in for your annual wellness visit, your doctor does a host of blood and urine tests. What do we do for the brain during that visit? For most people — greater than 95 percent — we do nothing.

“Creating a tool that can longitudinally track the health of an individual’s brain was, for us, a critical first step to taking the issue seriously.”

ClearEdge is administered by a healthcare professional. Patients use a tablet to complete cognitive testing that measures reaction time, memory, spatial processing, executive decision-making and other cognitive functions. They also wear a proprietary Bluetooth-enabled sensor that assesses balance and feeds that data back to the software on the tablet. All patient information is securely stored online.

Chrysanthou says ClearEdge is not the first digital solution for concussion, but it is the most robust. “There are likely 40 to 50 different products on the market today, mostly computer-based, that claim to aid in the diagnosis or treatment of concussion, but very few are FDA compliant. Secondly, most of those products focus on only one mode — cognitive function, stability or vision. Our product offers cognitive testing, balance testing, symptom tracking and pain inventory. Within our tests, we also work to tease out issues with vision.”

The ClearEdge solution comes preloaded on a Samsung Galaxy tablet. “Our competition sells software only, which requires clinicians to use their own technology,” says Chrysanthou. “Reaction time and processing time are different for every device, so the reliability of the scores cannot possibly be accurate from test to test. By standardizing the tablet, we ensure that every time an individual takes a test, they’re using the exact same device and seeing the same thing as everyone else. We don’t want some people seeing small letters and other people seeing big letters, or some people using a mouse and other people using a touchscreen. The tablet gives us the surface size to be able to fit all of our cognitive tests, all of our questionnaires, all our symptom tracking and pain inventory tracking, and allows us to have a standard experience for everyone and to ensure quality results.”

Chrysanthou says the company decided to use Samsung tablets because of the screen size, high resolution, consistency in response times, affordability and the Android operating system. He did not anticipate, however, the support and enthusiasm Samsung brought to the table. “Being a small startup, we didn’t think Samsung would have any interest in partnering with us. So we were surprised that our initial meeting with Samsung to discuss the best tablets to use for ClearEdge became a meeting about how to support the project more broadly, both in terms of technology innovation and bringing greater awareness to the ClearEdge brand.” 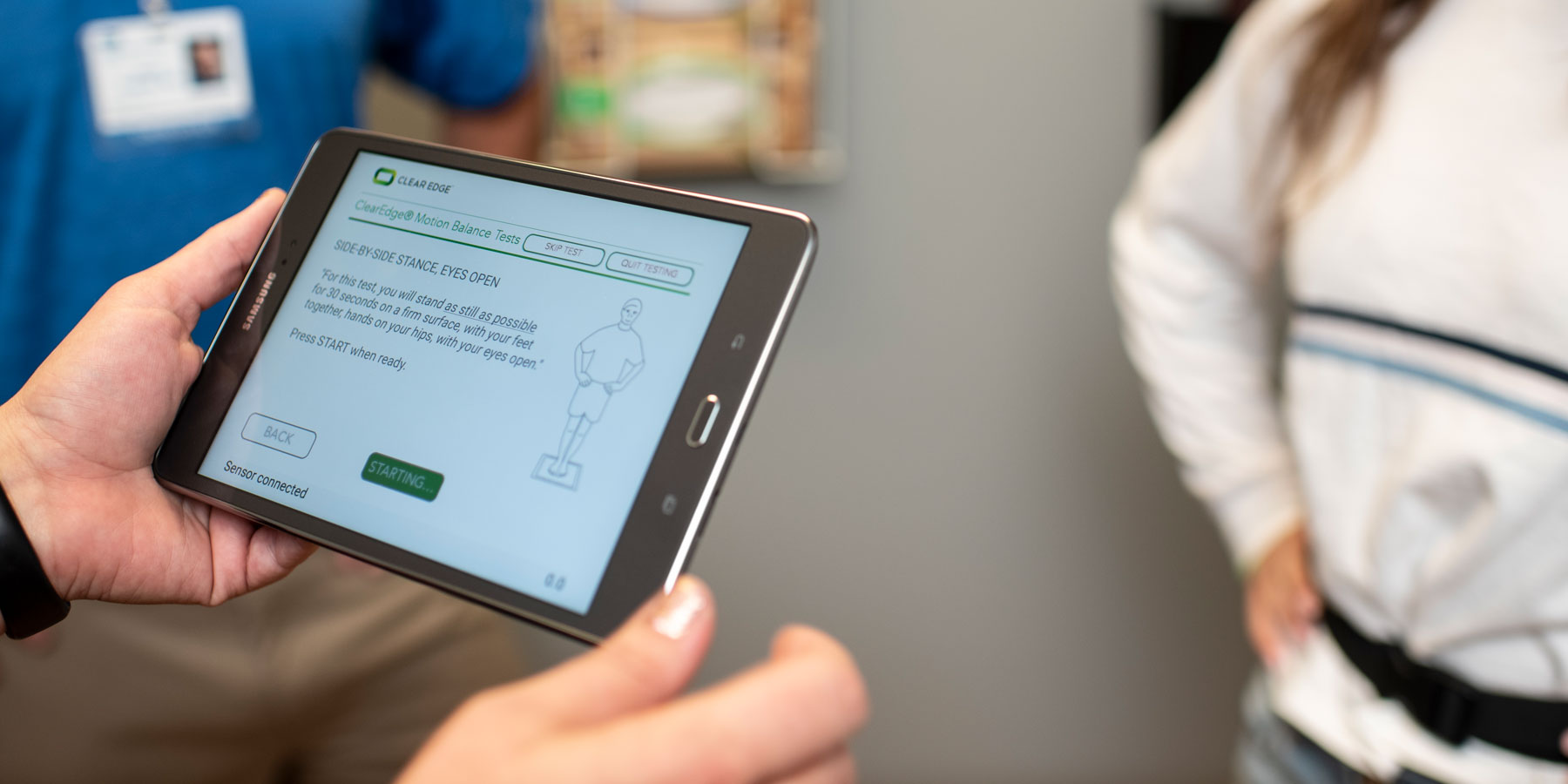 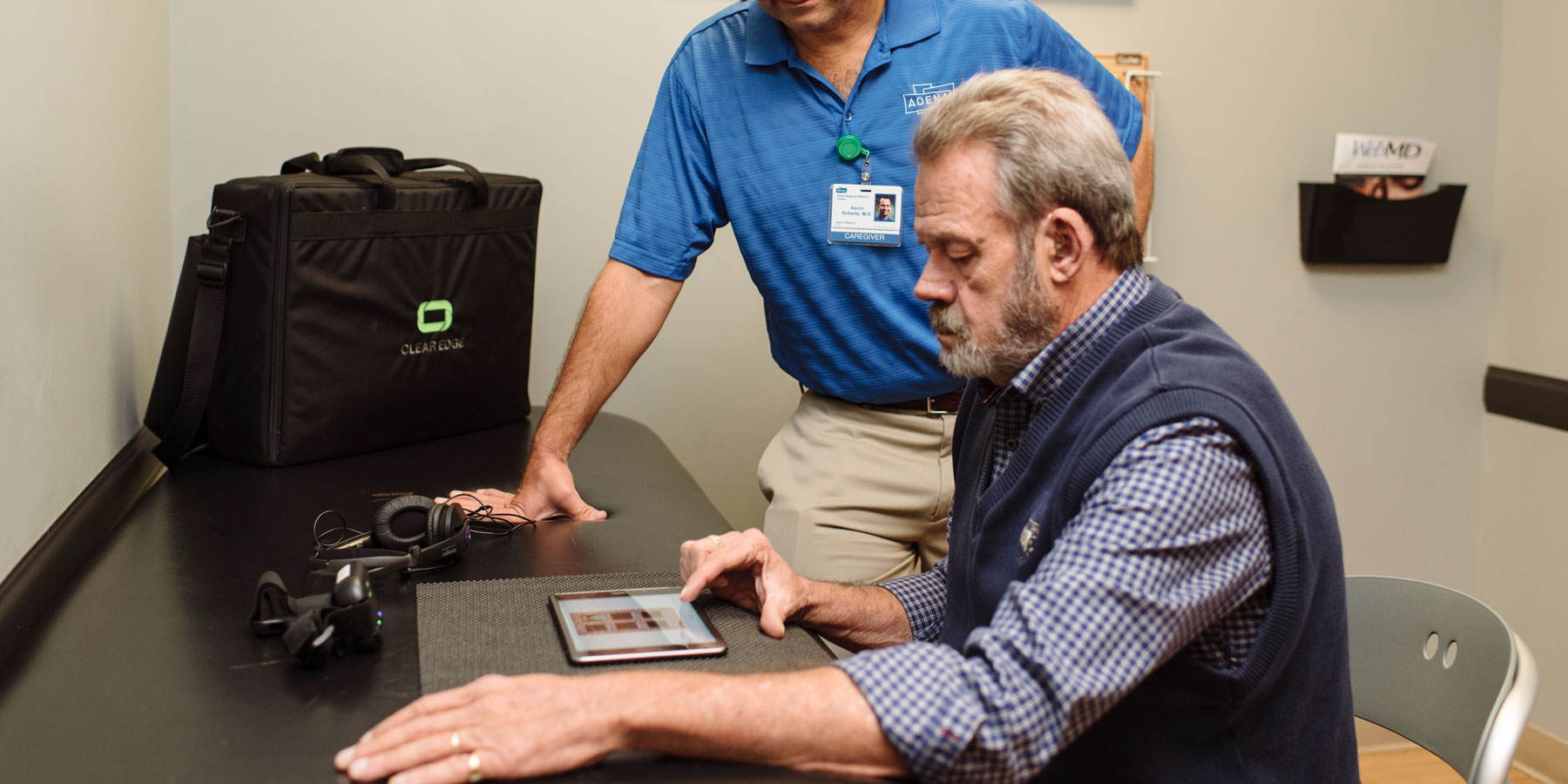 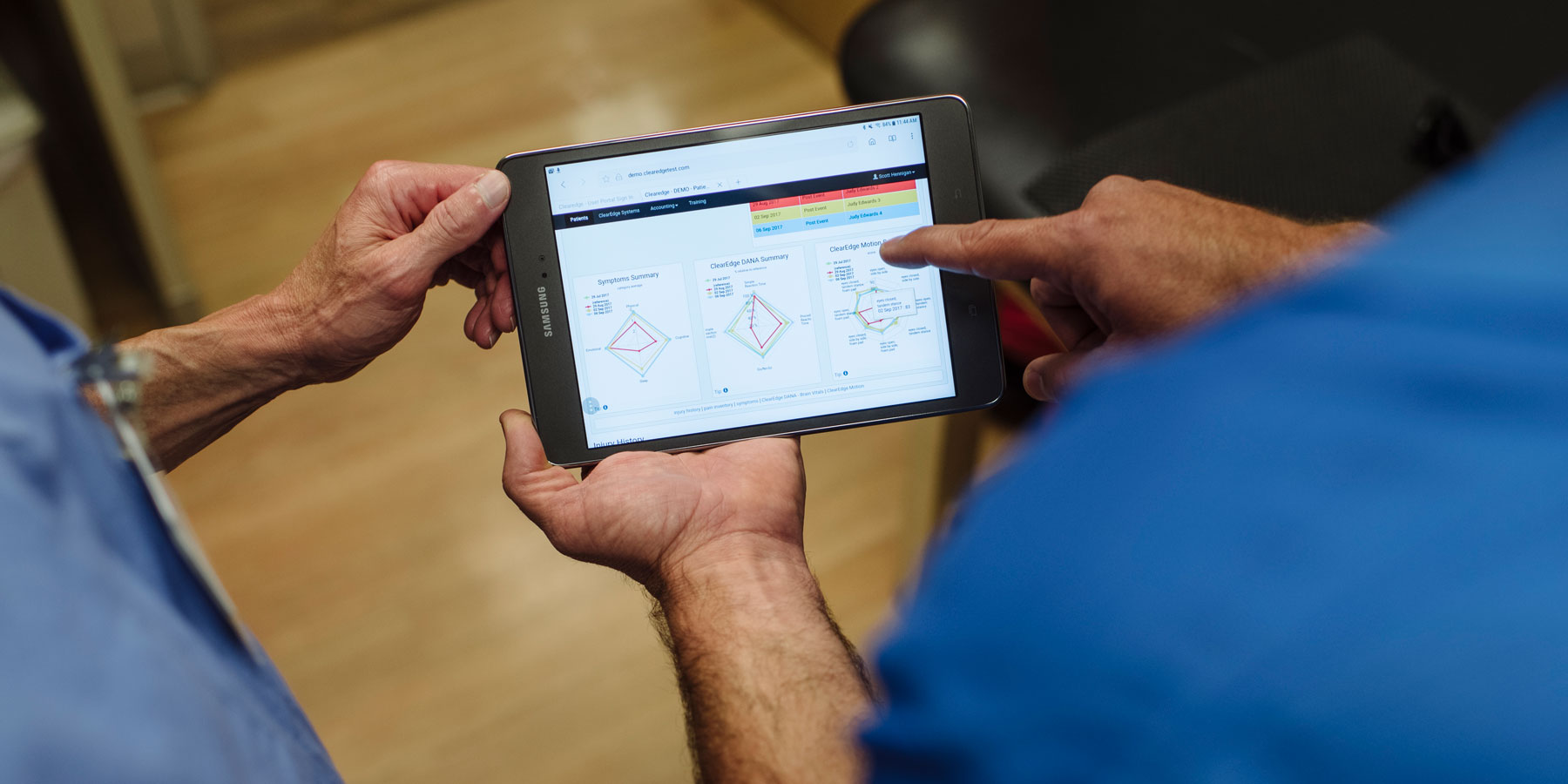 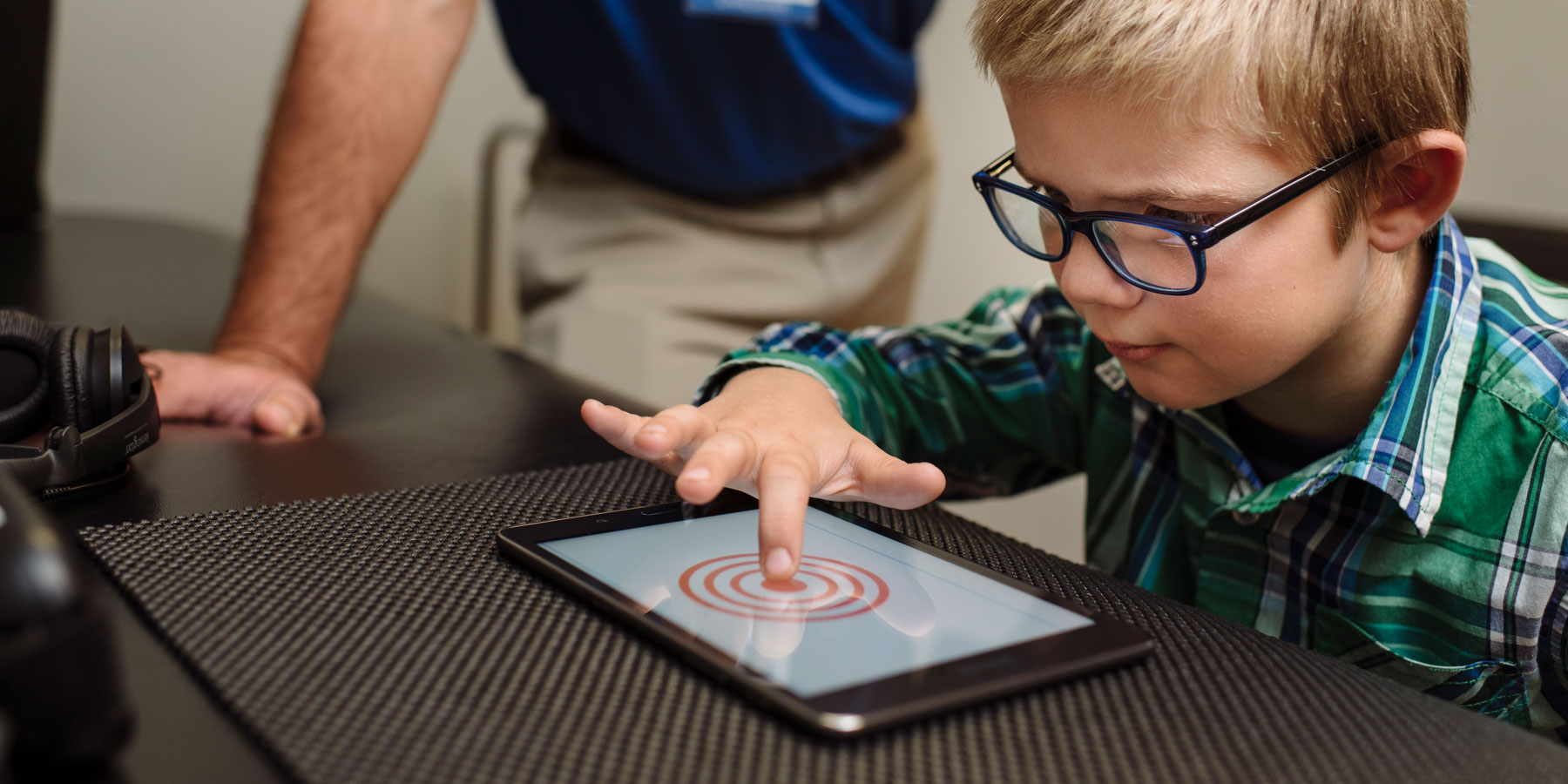 A rugged tablet with the tools to drive efficiency.

For physicians like Aaron A. Roberts, MD — a primary care sports medicine doctor at Adena Health System in Chillicothe, Ohio — ClearEdge is already demonstrating its ability to improve:

Quality of Care for Concussion
“I feel more confident that I’m seeing cognitive deficits and objectively picking up the balance difficulties that have been overlooked in concussion management to date,” says Dr. Roberts. “Concussed athletes are at a 35-to-44 percent increased risk of a lower-extremity, time-loss injury, largely due to balance issues.”

Dr. Roberts says there have been multiple patients he would have returned to play, but ClearEdge made him think twice.

“The most recent example was an 11-year-old football player who sustained a concussion. Initially he had significant cognitive difficulties. A week later, his cognitive scores were significantly better. But his balance testing was significantly worse. Before ClearEdge, I would have sent this kid back, and he would have been at a much greater risk for injury. Instead I was able to see him back in a week and show him and his parents that his baseline function had returned. With the objective balance I can feel more confident I am seeing a richer picture of the total problem.

“With the complexity of concussions, ClearEdge’s multidimensional tracking (symptoms, cognitive and balance) helps me paint a clearer picture for patients and parents to understand changes over time. When parents and patients see objective results it is easier to protect them from long-term problems.”

“I feel more confident that I’m seeing cognitive deficits and objectively picking up the balance difficulties that have been overlooked in concussion management to date.”
— Aaron A. Roberts, MD, Primary Care Sports Medicine physician

“It’s upsetting for parents when their advanced placement student suddenly can’t do simple math. Before, they had to take my word for it when I said the child had a concussion but was going to be OK. With this solution, I can hand them a copy of the ClearEdge report, give them a step-by-step explanation of the numbers, and help them understand how their child is progressing and why they shouldn’t worry.'”

On-Site Testing
As a mobile, cloud-based solution, ClearEdge enables physicians to take the test to the patient.

“From a mobility standpoint in sports medicine, it’s easy for me to travel with the ClearEdge kit,” says Dr. Roberts. “With the tablet, I can perform a test anywhere that I can get Wi-Fi service. Then I can use the tablet’s internet browser to get online and check their scores.”

General Brain Health Screening
Dr. Roberts envisions much broader applications for ClearEdge, outside of sports medicine. “If every primary care doctor was using ClearEdge, we would have a baseline for patients who sustain brain injuries. It could be used to track responsiveness to ADHD medication. Currently that burden falls on the parents and teachers, and their subjective assessment. In older adults, we can track cognitive decline or increasing risk of falls.”

Leaders at Quadrant Biosciences also want to make ClearEdge part of everyone’s annual wellness exam, and part of every senior care facility’s toolkit. Falls among seniors increase their mortality risk and cost the US healthcare system $50 billion a year.

“We’re on track to be the biggest provider in this space by the end of next year, and our competition has a 16-year head start,” says Chrysanthou. “That’s in many ways thanks to the work we’re doing with Samsung. I’ve been a business executive for approaching 25 years, and never have I had the pleasure of partnering with an organization like Samsung. The confidence this partnership builds within the organization, the morale boost, the drive, the recognition, the validation — it’s a really big deal for us.”

Smart Switch: How to transfer content from an iPhone to your new Galaxy smartphone

With full control over your content transfer, you can decide exactly what you want on your new smartphone, and what you don't.