The Hillsdale County, Michigan Sheriff’s Office may not be the biggest law enforcement agency around, but they’re quickly becoming one of the most progressive.

When Sheriff Tim Parker took office in 2017, moving the agency forward by embracing smartphone technology was a top priority. One of the first major steps taken by the 34-year department veteran was the creation of an agency smartphone app that became available in mid-2017. “We want to be part of a growing digital age and communicate with residents on a modern level,” Parker said. The app allows users to sign up for emergency notifications, view wanted bulletins, see patrol activity logs and provide tips to the department. The app, which has proven popular with residents, can even be used to pay fines or post bond for a friend or family member.

Sheriff Parker also wanted to equip his deputies with smartphones, and directed Lt. Todd Moore to oversee the effort. Funding was a large part of the consideration, and the agency began working closely with FirstNet to make it happen. “FirstNet developed special rate plans for first responders that were not previously available,” Moore stated. “They connected me with Samsung and together we came up with a package that was affordable.

“We were able to get the Samsung Galaxy S9s for all of our full-time deputies and command staff. We might have gotten another phone for slightly less money, but for the amount of things we were asking our deputies to do with their phone, it just wasn’t possible with a cheaper, less technically advanced phone,” he said.

According to Moore, the smartphones allow deputies to access criminal justice databases and they’re regularly used to check photos from state parole. “Deputies use the MI Officer app, an app that gives our deputies access to penal and vehicle code specifics, plus it includes a pill identifier they can use in the field,” he said.

“They also use the VINE Link (Victim Information Notification Everyday) app to get information about an offender, or they can register to be notified of custody status changes, such as when an offender will be released from prison. This is important for deputies who have been threatened by an offender, so they can be notified when the offender is being released,” Moore said. The notification is user configurable and can be received via phone, email or text.

“We’ve saved countless hours because deputies can now do a follow-up phone call from the field rather than make a 20 to 30-minute trip back to the office just to use the phone,” Moore explained. “Our deputies are not issued cameras to take crime scene photos, and now they can use their department-issued cell phone to take those photos.

“The Galaxy S9 takes phenomenal pictures. Recently, a woman reported an attempted abduction at a gas station. The responding deputy used his phone to take photos and a short video clip from the station’s security video,” Moore said. “He then sent pics and video to the other deputies so they would know what we were dealing with. The deputy really did a great job, all by using his phone and was able to accelerate our response to the incident.”

Moore noted that armed with the smartphones, deputies frequently send informational photos into dispatch for posting on the Sheriff’s Office app.

Getting More Out of Mobile Tech

“Deputies are also using their Galaxy S9 to scan documents like written statement forms, missing person forms or booking sheets, and then uploading those documents to our report writing system,” Moore explained. 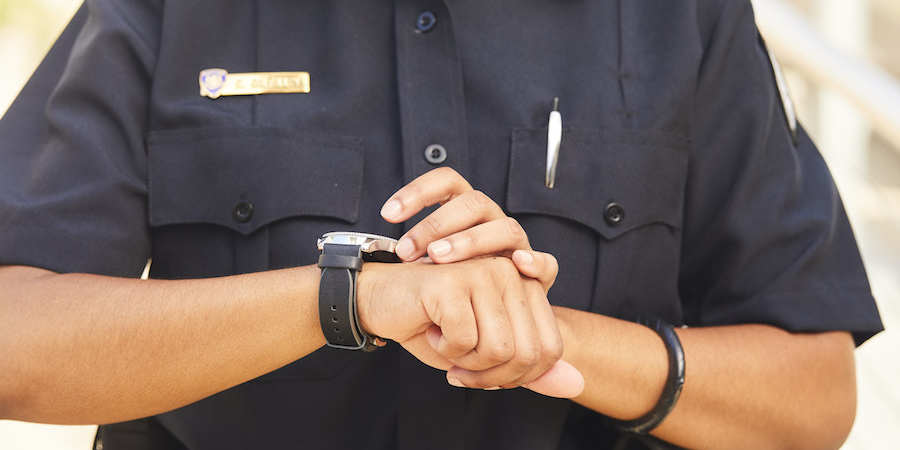 Get your free guide to leveraging smartwatches to enhance response capabilities. Download Now

“We had been considering putting a few scanners in the office for the deputies to scan and upload documents. By using the phones, we didn’t have to spend that money. The smartphones have definitely streamlined our work processes,” Moore noted. “We couldn’t do all the things we’re doing without them. We’re trying to go paperless and the smartphones are a key to getting us there.”

Overall, the smartphones have been very well received, and the deputies are using them regularly. In fact, Moore noted that the rollout of smartphones came at a great time, because a comprehensive organizational assessment was done when Sheriff Parker took office, and the number one suggestion/request from the deputies was to issue smartphones. “They’ve been a great tool and continue to prove their value every day,” Moore said.

Hillsdale County deputies have also begun using wearables, specifically the Samsung Gear S3. Lt. Moore says that he’s a big fan of the smartwatch, and after doing a lot of research, he purchased a Gear S3 smartwatch with his own funds before the department engaged. His favorite feature is the ability to send a discreet request for help. “I had done some testing with my personal Gear S3 and found the ‘Send SOS Request’ feature to be technology that we have been missing in law enforcement,” he explained. “The built-in duress feature permits a discreet alert to be sent to dispatch by tapping a button on the watch three times, thus opening a direct line of communication with 911 dispatchers. Once that open line has been created, that connection between 911 and the deputy will last for 60 minutes — or until our deputy cancels the request.

“If something happens and the line is disconnected, dispatch can ring the deputy back and the line opens back up without the deputy having to answer the call,” Moore said. “This is a great approach, and Samsung has really thought about safety with this technology. When that call opens back up, it is at the lowest possible volume. This gives dispatch a chance to hear what is going on and not make it known that the line of communication is back open.”

Moore explained that the duress system is set up to send out three simultaneous text messages when an alert is sent. “One goes to a preset, specified contact, saying help is needed. The second sends the specific location, and the third provides an updated GPS tracking of the sender’s location,” he said. “The main number we use is 911, but we have also put a dedicated phone in dispatch that receives the texts, so dispatchers have real-time awareness of where the deputy needing help is located.”

According to Moore, deputies often handle calls by themselves in remote areas where radio coverage may be spotty. “Sometimes dispatch isn’t able to reach our deputies when they are on a call, and we’d have to dispatch a deputy to check their status,” Moore said, adding that the responding deputy would often be driving at high speed for a long distance. “Now, we have a new policy. We send a ‘STATUS’ text that pops up on the officer’s smartwatch. The proper response is ‘SECURE’ and this often works, preventing a high-speed response. If the deputy does not respond, then help is sent.

Officer wellness is another priority topic these days, and Lt. Moore noted that the smartwatches have increased health awareness among many deputies. “The sheriff and undersheriff regularly compare the number of steps they’ve taken in a day,” he said. “And the Gear S3 notifies deputies if they’ve been sitting or inactive for a prolonged period. This is an area with a lot of potential, and we’re just beginning to understand it,” Moore said. On the administrative side, Moore noted that he really likes the notifications that the watch discreetly provides, allowing awareness of incoming emails and their subject line without the disruption that comes with checking messages on a smartphone.

Lt. Moore believes his agency has already realized significant benefits from the force multiplier impact of smartphone and smartwatch technology.

The Hillsdale County Sheriff’s Office is also becoming something of a force multiplier themselves. The department’s efforts have not gone unnoticed by other agencies in the region. Recently, the department hosted a Law Enforcement Tech Day, and more than 40 personnel from around the states of Michigan and Ohio came to learn more about what was possible with smartphones, wearables and FirstNet. “This is only the beginning,” said Moore. “And we will continue to leverage technology to improve our operational capabilities.”

Move your police department up the mobile maturity curve with the practical steps outlined in The Ultimate Law Enforcement Agency Guide to Going Mobile.