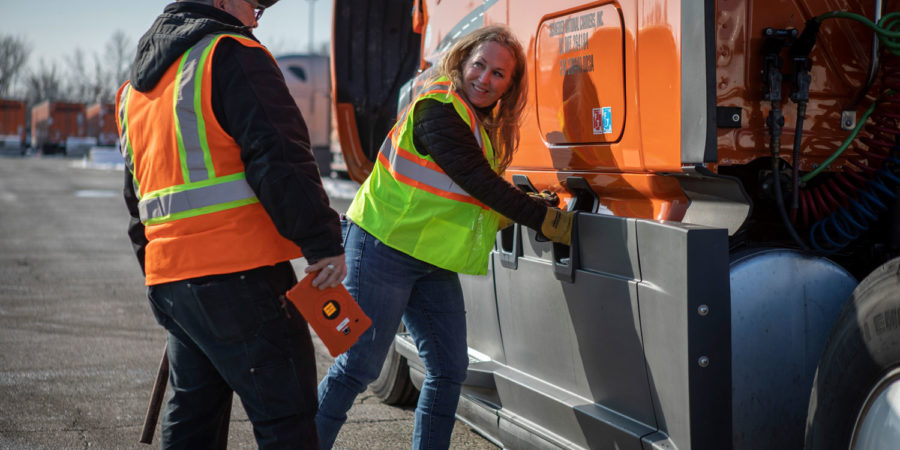 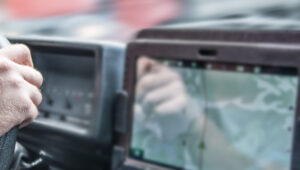 Driver retention: The impact of turnover and how to reduce it 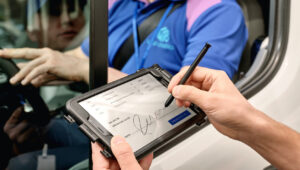 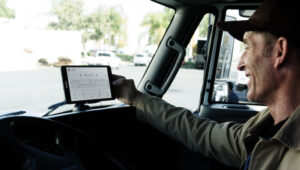 Schneider, a premier provider of truckload, intermodal and logistics services, was using proprietary hardware and a single-vendor software solution to collect data from its trucks and manage driver assignments. When the once-state-of-the-art technology became outdated, the company needed to replace it, but also wanted to limit its dependence on single vendors. Schneider needed a provider that could integrate its proprietary software with relevant third-party applications for connected fleets. To maintain its position as a technology leader and enhance its drivers’ experience, Schneider’s ideal provider had to support an agile workflow.

Using Samsung Knox Configure, Schneider created its own app store, with different suites for regulatory and productivity functionalities. Development firm Platform Science  helped build the regulatory apps, while Schneider developers built the “driver productivity suite” — which includes messaging capabilities, apps that scan and automate paperwork, and other useful tools. Schneider deploys all apps to Samsung Galaxy tablets, which are locked down in kiosk mode, customized for the job and managed by its Tech team. Because the solution is integrated with the back-office system, Schneider can monitor truck data in real time to improve performance, safety and compliance.

"Before, I ran two other devices as backups. Now I don't need to."
–Kellylynn McLaughlin, Trainer and Driver for Schneider

The new solution costs approximately 25 percent less than the old one. Drivers can access everything they need on the tablets, eliminating the need for personal devices — which improves safety and levels the playing field for employees who don’t have their own smart device or access to cellular data. Schneider is no longer dependent on external vendors, allowing the freedom to innovate and providing an agile development platform to do it on.

Schneider is a premier provider of truckload, intermodal and logistics services in the U.S., Canada, Mexico and China.

Founded in 1935, Schneider is one of the largest trucking companies in the U.S., with 15,650 associates worldwide and nearly $5 billion in annual operating revenue.

The Schneider fleet includes 35,100 company-owned trailers and 23,100 intermodal containers, while another 3,300 owner-operators drive their own trucks and lease their freight hauling services to Schneider.

With over 12,000 trucks and owner-operators pulling Schneider loads, the company’s connected fleets put millions of miles on the road every day. Orchestrating operations at this scale requires serious planning, coordination and real-time communication — for which Schneider has long implemented cutting-edge technology.

In 1975, Schneider installed a computerized control system that made its fleet the most advanced trucks on the road. A decade later, Schneider became the first trucking company to install two-way satellite communication systems in all company trucks.

“Thirty-plus years ago, telematics was invented by Schneider and one of its partners ,” says Mike Degeneffe, Vice President of Solution Delivery and Telematics at Schneider. “We created two-way satellite communication, which is basically greenline texting using satellites. Thirty years later, we switched to a cellular-based appliance that basically served as an ELD [electronic logging device]. It collected performance and behavior data from the truck and showed drivers their assignments. We used that for nearly a decade. Then our provider decided it wanted out of the telematics game, so it stopped investing in it. We lost our key relationship that was core to everything we do in the trucks. This was a strategic problem.”

Kellylynn McLaughlin has worked as a driver at Schneider for five years. She says the innovative technology is what first attracted her to the company, but in recent years, the software began to show its age.

“When I started at Schneider, there was a heavy investment in a technology and equipment upgrade,” McLaughlin recalls. “On the road, I would see other drivers pull out these big clipboards, and they would spend hours filling in their paper logs with rulers and pens, using maps and calculators to add up mileage. We had the in-cab device, which was good, because I didn’t have to do all that. But I didn’t really trust it, either, because it had connectivity issues and would go out at the worst times. And there were nights when a software bug got in my in-cab device and changed my ETA or next available time.”

“We could have switched to another piece of proprietary hardware,” says Degeneffe, “but our greatest takeaway was that we needed to eliminate our dependency on single vendors. We’re a $5 billion company and we can’t have our trucks go offline because someone decides they don’t want to be in a business that’s core to ours.”

Most companies either develop their own enterprise software or use third-party applications. Schneider developed a hybrid model where it does both, and then seamlessly integrates the apps on Samsung tablets.

Using Samsung Knox Configure, Schneider created its own app store, with different suites for regulatory and productivity. Schneider deploys all this fleet software to Samsung Galaxy tablets, which are locked down in kiosk mode, customized for the job and managed by its Tech team.

“We think of ourselves as assemblers,” says Degeneffe. “If we can buy software that will solve a problem for 10,000-plus drivers, we’ll get it. If not, we’ll build it.”

“Our goal is to eliminate all the nondriving tasks for drivers and to streamline messaging so drivers are not getting too much information or conflicting information, or getting calls while they’re on the road. We want them to have the ability to do whatever they need to do on the tablet so they don’t need to use their personal devices.”

The back office closely monitors the data coming from the trucks —  not just for ELD compliance, but for safety and performance reasons.

“We integrated the truck and trailing equipment technology with our back-office planning system, so all the data flows into the legacy technology in real time. We know how the drivers are running, where they are and whether they’re safe. Anytime there’s a harsh braking incident, lane departure or following-distance violation, we get an alert. We know where it happened, so we can plot it on a map and see the event in context with the road. We also have forward-facing camera technology, so we can see what happened before and after the event. There is no telematics solution as complete or one that provides the vastness of data as our system.”

Schneider deployed tablets to drivers throughout 2019. Now it’s developing new functionality, including video calling, intelligent message routing and improved navigation with real-time traffic and road conditions. Because of the agile platform Schneider has built, it’s delivering new capabilities on a monthly basis, Degeneffe says. But creating such a highly integrated solution was not easy. It took four years, hard work and resiliency.

“When you’re transitioning more than 2,000 drivers a month to the Samsung tablets, you’re not going to have the operations guy say that went flawlessly, because it didn’t. But it’s remarkable how well it went and how well it’s going. We have a very talented development team and a great provider in Samsung. They worked closely with us to understand and leverage Knox.”

Fleet managers rely on the Samsung Galaxy Tab E’s long-lasting battery and 4G LTE connectivity for everyday truck cab use. The Tab E is an affordable option for enterprises that need to deploy technology to thousands of employees, without compromising on reliability.

A Boost in Productivity and Reliability

Schneider has been using its new connected fleets solution for more than  a year, but leaders and drivers have already noted some key benefits:

“We think of ourselves as assemblers. If we can buy software that will solve a problem for 10,000+ drivers, we’ll get it. If not, we’ll build it.”
—Mike Degeneffe, Vice President of Solution Delivery and Telematics, Schneider

Degeneffe says Schneider will continue to build innovative apps to improve the driver, carrier and customer experience, and he expects the solutions to deliver even more value over time.

“The apps we’re building are a strategic differentiator. We don’t want to be dependent on another typical telematics company to provide functionality to us. Our objective here was to control the company’s destiny and disrupt the status quo. We did both.” 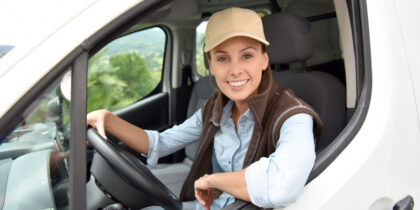 Magellan has long helped truck drivers find their way. Now, small businesses can use the same solution to manage deliveries. 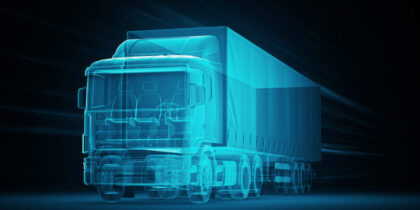 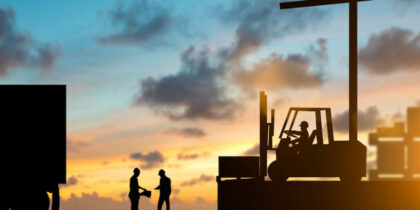 Will a smoother supply chain, you can prevent back-office complications, delayed packages and unhappy customers. 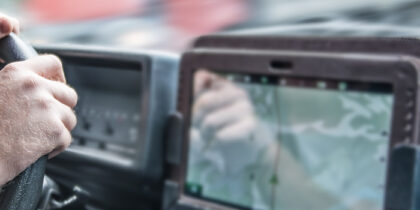 Driver retention: The impact of turnover and how to reduce it

Fleets are turning to secure mobile devices to improve communication and quality of life for truck drivers on the road. 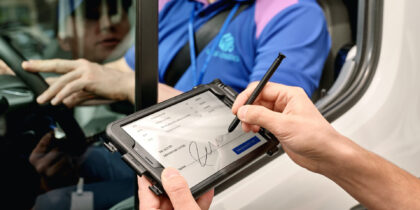 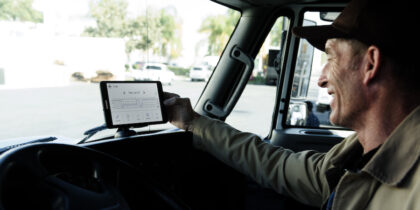