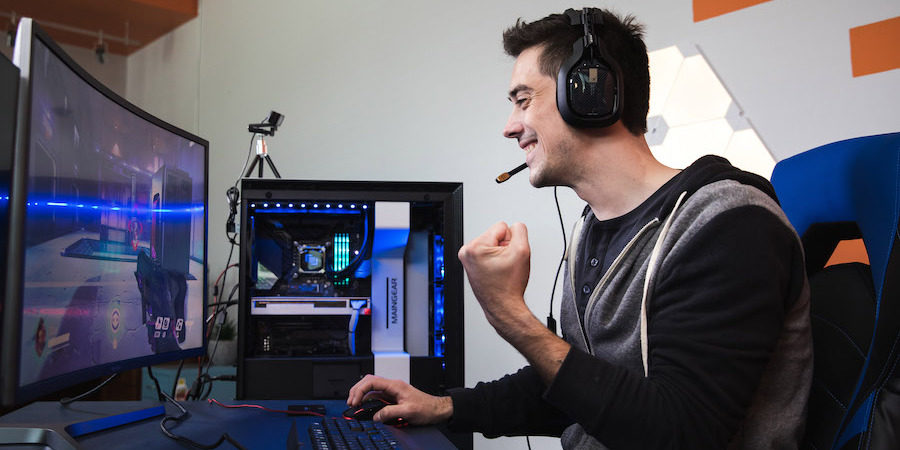 Ditch the glitch: Samsung’s 980 PRO is a PC gamer’s delight

Equipment can make or break the PC gaming experience. With the right gear, you can get an immersive, interactive ride, whether you’re taking on an action role-playing game (RPG) or a real-time 3D adventure. With the wrong equipment, you end up in the land of lag and frustration. The good news is that Samsung’s 980 PRO NVMe delivers all the goodies that gamers and professional users need in one easily useful solid state drive (SSD).

Action-packed Battle Royals and open-world adventures are a lot of fun, but it takes a lot of hardware to ensure that those PC gaming experiences are the adrenaline-pumping rides you and your squad expect.

Here’s a rundown of the hardware factors that drive high-octane PC gaming experiences and how the Samsung 980 PRO NVMe can support them.

Lag can disrupt the gaming experience considerably. After all, it will be game over if you deliver a delayed reaction while you’re being shot at. Behind the screen, the speed at which your equipment reads game data matters.

The Samsung 980 PRO uses the non-volatile memory express (NVMe) protocol to read and transfer data from the SSD over the peripheral component interconnect express (PCIe) bus. If you’ve used NVMe support over PCIe before, you likely already know that it’s much faster than serial advanced technology attachment (SATA). But the Samsung 980 PRO isn’t just any SSD — it exploits the latest PCIe 4.0 interface for truly unstoppable speed. Introduced in 2018, the PCIe 4.0 interface doubles the per-lane bandwidth over PCIe 3.0 (16Gbps/lane versus 8Gbps/lane) and is over 12 times faster than SATA SSDs.

With a PCIe 4.0 motherboard (currently AMD, and with Intel in 2021), the SSD boasts an impressive clip of 7000 MBs sequential read speed. The 980 PRO is a dramatic improvement over the 970 EVO Plus: It delivers up to 100 percent better sequential read performance.

The 980 PRO’s PCIe 4.0 interface is specially designed for speed. To deliver PCIe 4.0 performance, Samsung designed a new controller. The Elpis Controller in the 980 PRO has larger I/O queues that can handle four times as many commands as the Phoenix in the 970 PRO. At the same time, this controller reduces power consumption because of the brand-new 8-nm process used to manufacture it.

The Samsung 980 PRO’s 1TB capacity — a 2TB is slated for later release — brings higher speed to persistent storage and helps you maximize the efficiency of your game console. It allows for an incredibly quick boot as your stored game is whisked into memory in a serial read operation, which means no waiting for loading screens, as well as making the transition between cut scenes seamless the way you’d see in a well-directed movie.

These are additional reasons why the 980 PRO is the perfect addition to the PS5, which gives gamers the PC experience in a console.

You may be traveling at high speeds down NASCAR lanes once your game launches, but you need that consistent experience at all times, even three hours in. This applies whenever you’re using data-rich applications for visual renderings, and particularly when the results are graphics-heavy. You can’t afford to have the system crash on you.

Frequent use can lead to PC gaming devices becoming overheated, but not with the Samsung 980 PRO. The SSD is equipped with a nickel-coated controller and a heat spreader that dissipates heat at high temperatures so the 980 PRO can deliver blistering speed without blistering heat. The SSD is equipped with specially-written software, Dynamic Thermal Guard (DTG), which monitors the operating temperature and adjusts performance as needed to make sure the device does not overheat.

PC gaming enthusiasts know it takes a lot of moving parts to deliver a knock-your-socks-off experience. However, many gamers may have little real estate left within their hardware to devote to SSD capacity. Fortunately, the 980 PRO’s M.2 form factor fits comfortably in your gaming niche, delivering the superior performance you crave while taking up very little room.

Today’s immersive games and graphics-heavy applications demand equipment that can deliver considerable storage, speed and reliability. The Samsung 980 PRO checks all these boxes and more. With its mind-boggling 7000 MB/s and 5000 MB/s read/write speeds and 1TB SSD capacity, it’s just what you need to catapult your PC gaming experience into a new era.

Find out if it’s time for you to replace your RAID deployment with an SSD. Then find the right SSD for your deployment needs — whether for gaming or data center outfits — with this five-question assessment.

Poornima Apte is a mechanical engineer turned award-winning writer. Her work has been published by the American Society of Mechanical Engineers, TechCrunch, VentureBeat, OZY, Vox Media and other publications.