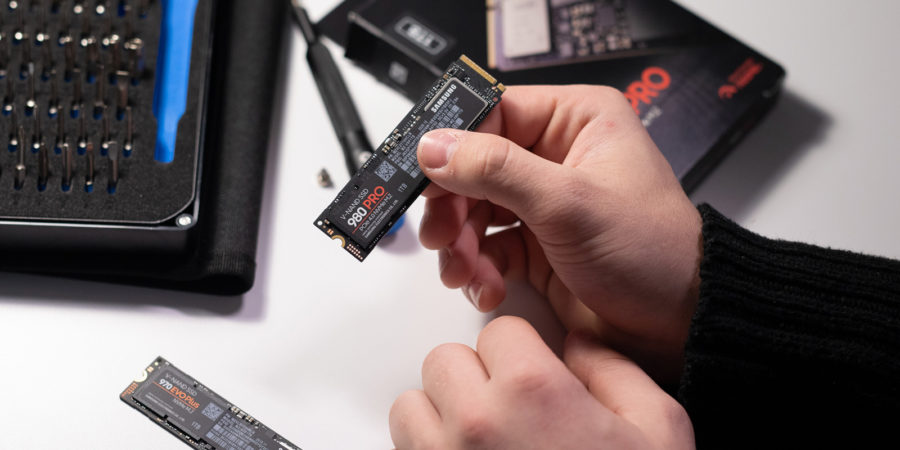 Falcon Northwest sources its components from a handful of best‑in‑breed vendors, which are then built together at the company’s Oregon facilities to create incredible gaming rigs. The company turned to Samsung for its storage offerings, tapping the 970 EVO Plus NVMe M.2 solid state drives (SSDs) in 500GB, 1TB and 2TB configurations and readying its design and sales team to make the Samsung 980 PRO available separately for its customers, too.

"All of the systems that we do are custom-built for the individual customer."
- Kelt Reeves, president, Falcon Northwest

Since announcing the inclusion of the Samsung 970 EVO Plus NVMe M.2 in its configuration options, the company has been building custom orders at a rapid pace to keep up with demand. Customers are thrilled with their new systems. Performance and reliability is high, and the company’s gaming PCs receive glowing reviews, all of which note the super-fast speeds and incredible gameplay. In addition, the company fields requests on a daily basis for the recently launched Samsung 980 PRO NVMe M.2.

A pioneer in the custom PC gaming industry, Falcon Northwest has been building elite rigs for power-users and gaming enthusiasts since 1992. Located in Medford, Oregon, the company builds desktop PCs, laptops and mini PCs, and designs its own casings. It was the first company to specialize in PC-building specifically for gaming. In addition to offering custom-built devices, the company offers in-house tech support seven days a week.

Keeping pace in a crowded space

Falcon Northwest was one of the first companies to jump into the custom gaming market in 1992, selling custom-built systems directly to gaming enthusiasts who are willing to spend upwards of $5,000 to achieve the type of performance needed for high-intensity gaming. Over the past 30 years, its customer base continued to grow as the gaming hardware industry exploded into the $40 billion market it became in 2020.

The company has always faced a challenge to keep up with the pace of the industry’s growth and build systems that can handle the graphics, processing and speed of modern games, according to Kelt Reeves, president of Falcon Northwest. “The new Microsoft Flight Simulator that just came out, for example, absolutely crushes hardware. It crushes the CPU for calculations and crushes the GPU for displaying graphics. It crushes the storage for getting these massive Google Earth real-time maps on and off the disk. It’s a game, but it’s probably about the most demanding thing you can do with a PC,” he explains.

And the challenge goes beyond games. Today, high-end gamers — or “performance nuts,” as Reeves affectionately calls them — are increasingly streaming their gameplay while recording it, too. Some will even use their systems to develop their own games and software, adding compiling and coding to the ever-growing list of things a high-performance PC must do effectively.

Since Falcon Northwest assembles every system by hand without an assembly line, and customers are making one-off purchases, the company must make sure they know everything about the components they use and can suggest the right equipment for the right needs, Reeves says.

“All of the systems that we do are custom-built for the individual customer. That means either they come to us with a list of parts that they know they want — some of which are right for what they do, and some aren’t — and we consult with them to build the right system with the right hardware to meet their needs,” Reeves said. “Or, customers come to us knowing they need to accomplish a specific goal and know nothing about hardware.”

Only the best will do

Falcon Northwest helps keep system quality high by choosing only the best‑in‑breed component manufacturers, working with them collaboratively to make sure all of the parts that go into systems are not only superior quality but also completely compatible with each other. Since storage speed is one of the main criteria Falcon’s gaming customers require, it turns to Samsung, stocking the Samsung 970 EVO Plus NVMe M.2 solid state drives (SSDs) in 500GB, 1TB and 2TB configurations. Recently, Falcon committed to adding the Samsung 980 PRO NVMe M.2 to its components list based on customer requests.

“Obviously, for enthusiasts, that speed is important for a myriad of things that they do. They’re not coming to us for the cheapest solution — they’re coming to us for the fastest, most reliable solutions,” Reeves said. “A primary drive failing is the nightmare scenario, but Samsung has a fantastic reliability track record with us. For us, the record of Samsung components is pretty much bulletproof. That’s so important to us, especially because our customers essentially want the computer version of a Ferrari that never needs to go to the shop. With storage, it generally works until it fails. We want storage that just works forever, and Samsung has been absolutely amazing in the reliability department.”

The size and optimized power efficiency of both the Samsung 970 EVO Plus and 980 PRO make them ideal for building high-performance computing systems with a smaller footprint to compete with traditional dedicated gaming consoles. Both the Samsung 970 and 980 PRO SSDs feature a compact M.2 2280 form factor, which are easily plugged into desktops and laptops. This is significant for Falcon Northwest, which sells a 4-inch-wide desktop called the Tiki and a shoebox-sized full-size system called the Fragbox in addition to its traditional tower model called the Talon.

Most important: The Samsung 970 EVO Plus boasts read/write speeds are 3,500/3,300 MB/s and 2,700 MB/s,* respectively — approximately 30 percent faster than the previous generation. Even more impressive, the Samsung 980 PRO features read/write speeds are 7,000/5,100MB/s,*⁺ sequential writes of up to 5,000 MB/s and 1 million IOPS, so gamers get the reliability and performance they need. Games load faster and users don’t experience any lag or wait time during gameplay.

There are many other advantages to installing Samsung’s SSD technologies, including:

Set it and forget it — it's game time

Falcon Northwest’s relationship with Samsung means it can compete for the most discerning gamers and PC users, Reeves says. “The Samsung drive is an important feature for us as it’s the absolute newest, hottest, cutting edge, fastest thing on the market and that’s what our customers are after,” he explains.

One Falcon Northwest customer — a game development firm located in the United States — says that the Samsung NVMe M.2 SSD drives are integral to their business model and product development. “Generally speaking, we find that faster storage significantly lowers compile times on building our projects. This time saved adds up over the course of processing several thousands of files multiple times a week or even multiple times a day. Additionally, it’s particularly useful for everything from caching motion capture data to in-game video capture to working on current projects simultaneously.”

On the professional and hobbyist side, Reeves says they rarely, if ever, hear any negative feedback from customers.

“If we’re doing our job, customers don’t necessarily notice the drives because all the loads are just happening very quickly,” he said. “Gamers generally don’t want to think about their storage. They want to have the capacity that they’ll never run out, and they want it to basically load everything instantly so they don’t even realize that there is a difference between whether they’re already in main memory or pulling it from storage.”

Indeed, Reeves says, that’s where he’s seen the biggest leaps in Samsung’s SSD performance — in improvement over load time. NVMe storage is such a radical boost from other SSDs. “In terms of performance, when people started noticing, they were saying, ‘Hey, I don’t see my hint text anymore.’ Yeah, that’s because your levels already loaded.”

**⁺ Performance may vary depending on the SSD’s firmware version and the system hardware & system configuration. Performance measurements are based on IOmeter 1.1.0. The write performances were measured with Intelligent TurboWrite technology being activated. The sequential write performances after Intelligent TurboWrite region are: up to 500MB/s (250GB), 1,000MB/s(500GB) and 2,000MB/s(1TB).