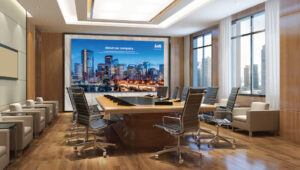 The Wall All-in-One: Changing how businesses use LED

RevelTV is pushing the boundaries for digital signage with a canny mix of in-house solutions, originally built around creative applications, but which now extends to every aspect of a project. They’re equally comfortable in chain retail environments and massive sports or entertainment complexes.

Much of RevelTV’s business is built around Samsung’s Smart Signage system-on-chip (SoC) display technology, which has allowed the solutions provider to trim both startup and operating costs for customers, as well as dramatically increase network reliability.

E-commerce giant eBay’s Global Customer Support Center in South Salt Lake City worked with RevelTV to develop a new corporate communications system featuring five signage channels, each of which can be designated as either corporate-wide or department-specific.

The company’s signature project to date had complementary objectives of driving revenues while also elevating the gameday experience for sports fans.

RevelTV was engaged in June 2017 by its hometown NBA club, the Utah Jazz, to convert Vivint Smart Home Arena’s aging, underperforming digital signage system to a new system that would include more than 600 displays. With RevelTV taking on all aspects of the project, from idea and strategy through execution, the project was delivered in a matter of weeks — while the arena also underwent a breakneck $125 million physical upgrade.

Brian Fitzpatrick, co-founder and CEO of RevelTV, says the project was a whirlwind of activity squeezed into the middle of the four-month renovation.

“We did all of it,” he recalls. “We did all of the system design and documentation, procured all the hardware, did all of the installations. Currently, we manage all of the content, and we create a lot of their content. We manage the service and monitor the service, and we also have what’s called an event day operator, who is at every event to maintain the system, and be there if there are any problems.”

The mix of screens around the facility ranges from 49-in. to 82-in., and there are 27 video walls — in 3×1, 4×1, 4×2 and 2×2 configurations. RevelTV also worked with Samsung to develop a first-of-its-kind IPTV system used in premium areas, such as suites.

RevelTV builds its service delivery to clients around its in-house Signage Valet digital signage application, which integrates and uses multiple digital signage content management platforms, selecting software based on use case and capabilities.

Much of its customer work is now built around Samsung’s smart signage solution — using SoC and the Tizen operating system — because the technology streamlines installations and raises uptimes. Flat panel displays with embedded players remove the need for external devices and their accompanying tangle of cables, making for faster, easier installations.

Most conventional signage installations have external players with hard drives and cooling fans, as well as video signal cables and networking cables — all of which are subject to damage and failure. With embedded players, all these potential hazards disappear.

“So reducing capital costs because you don’t even have an external media player is obviously huge,” explains Fitzpatrick, “as well as reducing those failure points, so that you have greater uptime. Your long-term TCO is lower, because you’re not having to constantly fix or replace media players and their components and cables.”

No Project Too Big or Too Small

RevelTV has developed a varied portfolio of deployments, managing everything from single-screen jobs to networks with hundreds of locations.

The company’s roots are in producing low-cost but professional-quality creative content for digital signage network operators, filling a gap between freelancer designers and agencies. RevelTV built a reputation for being able to deliver all the messaging needs for businesses, at reasonable rates and at the turn-around speeds many small to medium businesses demanded. RevelTV’s designers have produced more than 40,000 content pieces for signage networks and social media.

Having established itself as a trusted service provider for clients, Fitzpatrick says the company has increasingly found itself being asked to take on a broader scope of work on digital signage projects. RevelTV team members get involved as early as the idea stage, and in many cases do the ongoing operational management of networks — from content scheduling and delivery to monitoring.

The client base now varies from food services chains like Grideli’s and clinicians like Derma Health to national service providers like Maaco. Vertical markets range from dental and health services to education and banking.

The company’s ideal client is well-defined: business operators who don’t want to become digital signage experts, and want to leave that in the hands of pros.

Explore the breadth of Samsung’s digital signage solutions and see how you can provide a new level of customer interaction and engagement for your enterprise. 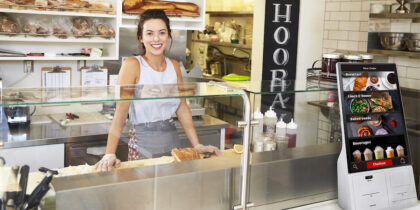 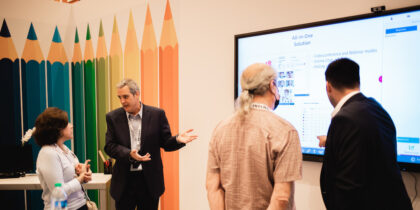 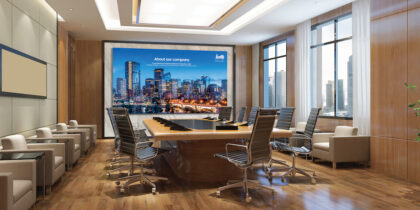 The Wall All-in-One: Changing how businesses use LED

Samsung's microLED product changes the game for the design of video walls for retail, public spaces and media.