Why You Need SSDs for Your VDI Deployment

Your IT team may be considering deploying a virtual desktop infrastructure (VDI) in your organization. In this type of model, end users use inexpensive thin-client devices to interact with virtual machines or virtual desktop sessions over the Remote Desktop Protocol (RDP) on a network connection. The actual applications and processing run on a server, and the thin client only exists to provide the setup and network connection and display the user interface on the monitor.

Companies look to models like this to reduce the cost of desktops, including hardware and support, and to reduce the total cost of management — updating one VDI host can update as many as 50 virtual desktops at the same time, and installing new applications offers similar savings in time and management. There is also a significantly reduced attack surface on the thin client, making the overall footprint more secure, since patching essentially needs to happen almost exclusively on the server and not the clients.

One of the primary disadvantages to the VDI model is the centralized nature of the demands on a storage infrastructure. At 8:30 a.m., when 36 users begin to log into their systems, the server experiences a heavy load. In addition, some users take up more system capacity than others. For example, computer-aided design (CAD) and image editing require far more system resources than simple Word document editing or sending and receiving email.

What are some ways to mitigate this load, whether it’s spiky due to time of day or sustained because of general usage patterns?

This is where solid state drives (SSDs) can help. SSDs speed up VDI environments by providing a faster storage subsystem. Because VDI involves consolidating multiple desktop “hosts” into separate virtual machines or virtual desktop sessions, demands on a storage subsystem will naturally be higher than in a traditional server setup where only file and print or database query traffic is handled — in a VDI setup, the entire user session is making parallel demands. SSDs deliver more input/output operations per second (IOps), making them essentially a slam dunk for improving performance.

Additional storage decisions can also affect performance. Selecting drives with the lowest latency and picking RAID levels with an eye toward performance (while also gaining some fault tolerance) can help a VDI-hosted desktop seem a little speedier. There is also storage software from Samsung and others that can help manage drive parameters to tweak performance depending on individual installations, and models like thin provisioning exist to utilize limited resources somewhat more efficiently.

Overall, SSDs are a great choice for VDI deployments and should represent a cornerstone of the storage subsystem. The capacities available with SSDs have been increasing consistently over the past few years, as have their reliability and endurance specifications, while their cost has come down significantly over a similar time period. An all-flash storage array can make for a very peppy VDI deployment.

There are a host of questions to consider when scoping a storage infrastructure for virtual desktops:

Samsung provides a variety of enterprise-class, data center-ready SSDs that would suit a VDI deployment well. For instance, the 883DCT offers large storage capacity while handling heavy mixed workloads with reduced latency. It is tuned for a faster sequential read speed — 550MB/s — and costs less over time than traditional hard disk drives (HDDs).

Take this quick assessment to determine the best storage fit for your needs. 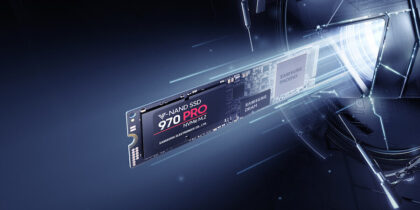 In the right setting, NVMe is an improvement over interfaces like SATA and SAS. Here's how to achieve optimal SSD performance.