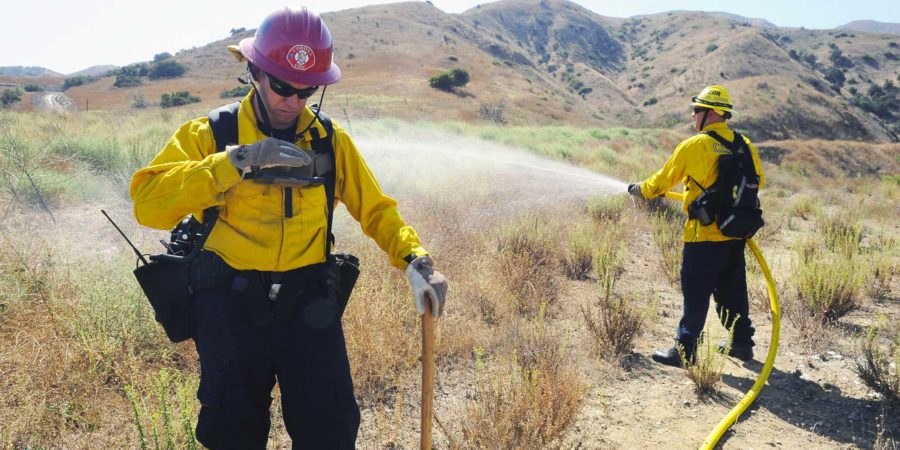 Whether the Corona Fire Department (CFD) is fighting a wildfire, searching for a lost hiker, or responding to a traffic accident, the more information they have about the situation, the more effectively they can do their jobs. They needed a mobile situational awareness platform that would let them put all critical information — including footage from their unmanned aerial vehicles (UAVs) — in one place, to visualize it and easily share it across the response team.

CFD has deployed Android Team Awareness Kit (ATAK), a tool created for the United States military to improve situational awareness for troops and to help commanders plan successful missions. ATAK layers data from multiple sources and UAV video onto one 3D map that personnel can view in the field and edit as they go. CFD equipped firefighters with Samsung Galaxy S10 smartphones and commanders with Galaxy Tab S4 tablets to take full advantage of ATAK in the field.

"Our old tablets were upwards of $3,000 each once you added in accessories. With Samsung, we're saving $30,000 on a three-year replacement cycle compared to our old solution." — Andreas Johansson, fire captain, CFD

ATAK provides invaluable situational awareness that helps CFD firefighters do their jobs more effectively, efficiently and safely. The new mobile solution has been used in a number of large-scale operations already, and is helping responders stay in sync while cutting down radio chatter. The switch to Samsung devices will save CFD $30,000 on a three-year replacement cycle compared to its previous solution, and Samsung Knox provides the encryption that CFD needs to secure data without compromising device flexibility for firefighters.

About the Corona Fire Department

The Corona Fire Department (CFD) serves the city of Corona, California, which is located just outside of Orange County and approximately 45 miles southeast of Los Angeles. Corona encompasses 39.2 square miles and is home to more than 160,000 people.

In addition to fighting structural fires, CFD provides emergency medical services (EMS) and heads up search and rescue efforts after natural disasters and other urban hazards. Because Corona borders a national forest, CFD is also responsible for remote area rescues and extinguishing wildfires.

Providing Easy Access to All of the Department's Data

Corona, California is a relatively small city, but its fire department faces some unique challenges. Like most fire departments in the U.S., CFD extinguishes burning buildings, rescues people from hazardous situations and responds to EMS calls. Unlike most fire departments, Corona borders the Cleveland National Forest — a 460,000 acre park with a variety of recreational activities, plenty of places for hikers to get lost or injured, and more than 110 wildfires each year.

Whether Corona firefighters are battling a wildfire, searching for a lost hiker, or responding to a traffic accident, the more information they have about the situation, the more effectively they can coordinate their efforts and do their jobs. That information comes from several sources. Data from the 911 dispatcher comes through the computer-aided dispatch (CAD) system, which firefighters access via laptop. Until recently, each truck had a single smartphone, which teams used to access contact lists and resource apps. The department also has four UAVs, which they use to assess wildfires and to aid with search and rescue.

For further intel, firefighters had to rely on radio communications with other assets on the ground. They didn’t have a way to put all this information in one place, to visualize it or to share it easily with everyone else on the response team.

Andreas Johansson, a CFD fire captain, explains, “With the CAD system, we can see where the fire engines are and communicate with the other fire crews, but in the past 20 years, that technology has stayed somewhat stagnant. We had some basic map layers, but what we didn’t have was something robust that we could take out of the fire engine, or that was really inclusive of detailed map data. We couldn’t see where our resources were when they were off the fire engine, other than using ‘find friends’ to track each other’s personal smartphone.”

Johansson knew it was time to invest in mobile solutions to improve situational awareness for Corona firefighters. And when he discovered the ATAK, he knew it was time for new Android smartphones.

While CFD was battling the historic Mendocino Complex Fire in 2018, Johansson got an unexpected call about the California National Guard’s MQ9 Reaper UAV. “The guy asked, ‘What if I could bring that MQ9 video into your hands on a mobile device?’ I said, ‘That would be awesome.’ I drove to Walmart and bought the nicest Samsung tablet I could get. The next day, I had that video overlaid on our operations map, and it was awesome.”

Johansson was looking at ATAK — a tool created by the U.S. military to improve situational awareness for troops and help leaders plan successful missions. Developed by the Air Force Research Lab, ATAK had recently become available to federal, state and local governments.

ATAK pulls data from a variety of sources and puts it all on one 3D map that teams can view on a mobile device and mark up as they go. In a wildfire, for example, aerial video from each UAV can be overlaid on this map, showing exactly where the fire is. As firefighters explore the terrain and discover new fires, they can add them to the map. They can also see dots representing the GPS location of other team members, trucks and aircraft. Teams can even leave digital “breadcrumbs” to mark their path. When ground crews need aircraft to drop fire retardant foam, they can simply draw a line where they want the foam and send it to the aircraft crew. They can also add markers to indicate meeting points or refueling stations.

PAR Government, an integrator that was involved in the development of ATAK, has created a robust enterprise backend solution called Team Connect that enables public safety agencies to share situational awareness data across their ATAK-enabled devices. Using APIs, Team Connect can tie other data sources into ATAK, including fire service technology like rapid SOS, systems, aircraft sensor data and even CAD systems. This way, first responders can view CAD data on the Team Connect map.

As of 2019, ATAK has an estimated 175,000 military and civilian users across numerous public safety agencies. Johansson wanted CFD to be one of them, so he enlisted the help of Mike Leckliter, a firefighter who manages technology for the department. Leckliter had been making the case for Android for years, citing both cost savings and flexibility as advantages. Together, they convinced the department to switch to Samsung.

CFD is now using approximately 45 Samsung Galaxy S10 smartphones and Galaxy Tab S4 tablets. Each truck has two tablets, and each team has one smartphone. They can also screen mirror the tablets and phones to a larger display in the command vehicle.

David Tally, director of applied technology for PAR, says the open nature of the Android platform has been critical to the successful evolution of ATAK. “Android makes it much more accessible for developers. It’s an open ecosystem, which is why ATAK has been so effective as a situational awareness platform.”

“We’ve been very heavy Samsung users since ATAK was first developed back in 2011,” says Tally. “The device form-factor and capabilities have evolved so much over the years. Then there’s the support that Samsung provides developers. We’re able to say, ‘These are the concerns of our end users, or here’s what we need to make the most out of our application.’ The Samsung team has always been good to work with, and it’s been a solid platform for us.”

The Galaxy S10 is a powerful device that’s ideal for first responders who need to do more on the go.

For incident commanders, the Galaxy Tab S4 provides the performance, battery life and a large, high-res screen to survey the entire scene.

“Android makes it much more accessible for developers. It’s an open ecosystem, which is why ATAK has been so effective as a situational awareness platform.”
— David Tally, director of applied technology, PAR Government.

Going forward, CFD will continue to look for innovative ways to improve situational awareness with mobile solutions, Leckliter says. “Our IT department has some very forward thinkers, and we see the Android platform as a way to innovate and move the department into the future,” he says. “Any way that we can take technology to enhance our product delivery, we try to embrace that.”