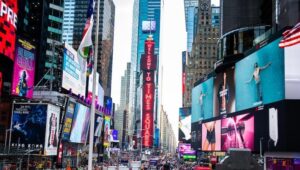 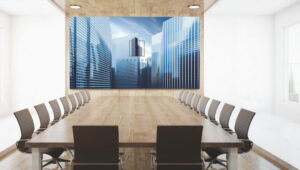 An urban legend from the early days of cinema goes like this: During the first public film screening in France, audience members were so overwhelmed and disoriented by footage of an oncoming train they ran from the theater, screaming in panic.More than 100 years later, it’s hard for most of us to imagine being this affected by a film. With the proliferation of video and digital media, our brains are accustomed to discerning between real life and the image on a screen. 3D movies get pretty close to wow-worthy, but it’s still very easy to see the difference between real and fake.But now, thanks to Samsung and Prismview, we’re a bit closer to finding that line.The LED display boards at the National Geographic: Ocean Odyssey Encounter in NYC’s Times Square are groundbreaking. Visitors slip into an underwater world, engaging with shots of tropical fish and terrifying sharks. These cutting-edge boards create a viewing experience that’s closer than ever to the real thing.

The technology making this revolutionary experience possible at the National Geographic installation comes from the minds at Samsung. The brand’s IF Series is a new line of next-generation LED displays transforming how businesses engage customers. To say these display boards are unique would be an understatement.

Using a technology called dynamic peaking, IF Series boards minimize interference from natural or ambient light, allowing the displays to reach a brightness level twice that of a standard LED display. The resulting image is crisp, clear and produces a more complex range of color. On an IF Series board, a coral reef transforms from washed out blacks and blues to a brilliant constellation of color, exactly as it would appear in real life.

This effect is particularly apparent with human skin tones. On conventional LED displays, oversaturation can cast skin in an odd, reddish hue. IF Series displays diminish this effect while maintaining a more consistent color gradation. As a result, images look far more lifelike.

Learn how to build the optimal videowall for your business. Download Now

Simultaneously, IF Series displays bring image contrast and brightness to a new height thanks to Scene Adaptive HDR technology. What does this mean? Well, inverse tone mapping algorithms analyze an image to make sure gradation and brightness levels are much closer to how they appear in reality while simultaneously eliminating shine. The result is a bright viewing experience that’s much more uniform, making it more comfortable on your eyes.

For businesses, these display boards present endless opportunities to transform the customer experience. According to Prismview Product Manager Kevin Izatt, in just a few years, the displays will be everywhere. “We’re seeing these take over; the sheer scale of what the [IF Series boards] can be used for is huge,” says Izatt. “From conference rooms and hotel lobbies to sporting arenas and shopping centers, there are so many locations that could take advantage of this technology to heighten how customers encounter their products or services.”

This makes sense. Imagine walking into a hotel in Manhattan and being met with a wall-length, lifelike display of the Statue of Liberty, shot in dazzling color. Consider going to buy a cup of coffee and watching a video of how the cup of joe is farmed and roasted, filmed with vivid clarity. You wouldn’t just be amazed — you’d stop in your tracks.

Beyond content capabilities, the design of IF Series boards makes for easy installation. With a compact size and direct-to-wall mount kits, these boards fit together seamlessly on any wall (or even the ceiling). And with convex and concave curved configurations, you can use these display boards to transform any space into a unique, eye-catching experience. That’s what National Geographic did when they designed their underwater adventure in the middle of NYC.

Dive down deep at National Geographic

For the project, Prismview and Samsung helped NatGeo deliver an experience that, just a few years ago, was reserved for accomplished scuba divers in the Solomon Islands. In 10 unique scenes, visitors travel to an underwater world filled with bright schools of fish, dolphins, manta rays and coral reef. But this isn’t an aquarium — in fact, there’s not a single live fish to be found. Instead, IF Series screens line the walls, curving to meet the floor to create a visual effect so powerful and so realistic that The New York Times thought to tell people, “You won’t need diving equipment, but don’t forget to breathe.”

For National Geographic, IF Series screens are an opportunity to engage viewers in a new way. “The IF series boards bring the ocean experience to life,” says Joseph Rose, Head of Operations at National Geographic Encounter. “Visitors are amazed by the picture quality and resolution… it makes the entire immersive experience more lifelike.”

In one scene, a tiger shark rushes right at you, and in another, a humpback wave glides onto the screen. Each scene feels as real as it would underwater, filling visitors with adrenaline, awe, and amazement. It’s like nothing you’ve seen before.

But thanks to IF Series displays, scenes of this caliber will soon be everywhere, transforming the way we see and experience the world.

When selecting an indoor or outdoor LED display, resolution matters. This guide explains resolution, pixel pitch and how to pick the right one for your business. 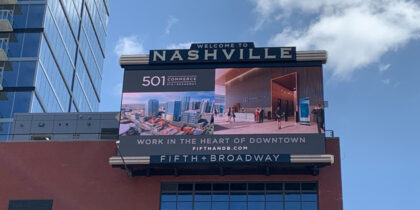 A large Samsung LED display brings energy and excitement to Fifth and Broadway, transforming the environment and elevating the guest experience.

The true cost of an outdoor LED display includes the sign itself, installation, content management and more. Here's what you need to know to budget for LED signage. 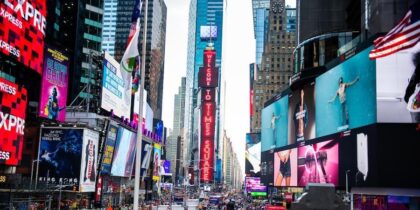 With direct-view LED displays, businesses can easily tailor their messaging to fit any space — and any audience. 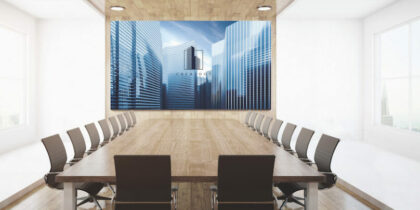 Samsung's microLED product changes the game for the design of video walls for retail, public spaces and media.