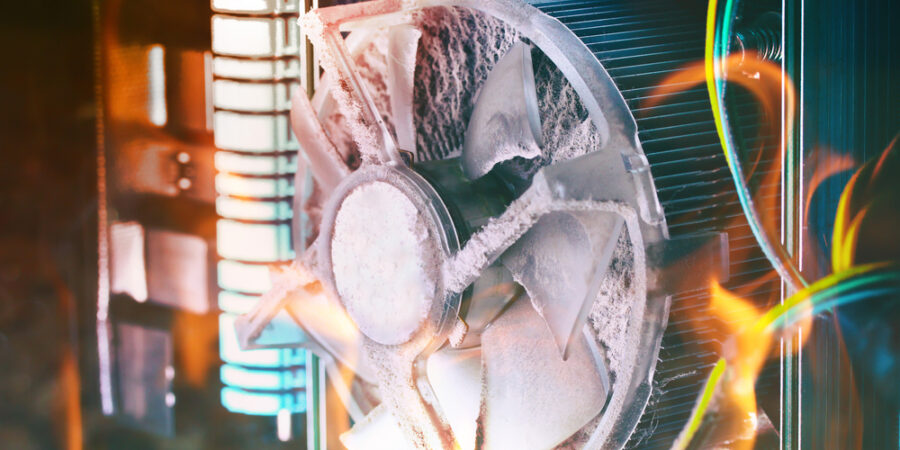 It might start with a little extra noise. You’re playing a graphic-intense game, and you notice your PC’s fan is running more than it normally does, and the case begins to feel warm. But what exactly is causing your PC to experience these symptoms? And how can you fix it before disaster strikes?

What is thermal throttling?

Whenever your computer is taxed, either by an application or game that requires lots of processor power or by the use of multiple applications at once, the components generate heat. The harder a PC works, the more heat is generated. The machine tries to cool the components using internal fans, which blow the heat out of the enclosure via vents, but fans can only do so much. You can tell there’s a problem when the case feels warm to the touch and the fan is constantly on. If the system overheats completely, it will either freeze or shut down to protect itself.

Thermal throttling is designed to cool and protect CPU and GPU chips in response to heavy workloads, but there’s one caveat: Although thermal throttling protects the hardware, it can cause game lag. As PCMag.com notes, “Thermal throttling helps cool the chip when it gets too hot by lowering the speed.”

By controlling clock speed, the PC can reduce the amount of heat being generated. While this approach isn’t dangerous and can actually be protective, slower speed means less processing power. For gamers, this might mean lower frame rates. Images and graphics may load slowly or seem to hang, negatively impacting gameplay. This happens more often for those who play high-resolution, high graphic intensity games, such as first-person shooters like Call of Duty and Halo, or any other game with rich, immersive graphics.

There are several modern technologies and techniques that exist to mitigate or prevent throttling. Experts suggest turning off all unnecessary applications and cooling the room that the PC is in, but these are simply stopgap measures that may not do enough to lower the temperature inside the PC’s case. There is one option, though, that’s both easy and accessible. Heatsink can prevent overheating and the accompanying game lag.

Heatsink technology is available for many types of electronics. Heatsink devices attach directly to a processor to draw heat away from it and protect it. HowStuffWorks states that a heatsink is a thermal conductor that “carries heat away from the CPU into fins that provide a large surface area for the heat to dissipate throughout the rest of the computer.” These fins, coupled with built-in fans, cool the entire device, including the heatsink and processor.

Heatsink-enabled chips are easy to use because they can be installed at the manufacturer level or after the fact as heatsink-enabled CPUs or solid state drives (SSDs). Chips with heatsink help to minimize game lag and graphics deterioration, and they eliminate the need to exit out of disparate applications while gaming, as they cool the system so well that CPU limitations aren’t an issue.

There are many SSDs that come with heatsink technology, including Samsung’s 980 Pro with Heatsink. Designed for next-level computing and gaming, the Samsung 980 Pro with Heatsink can be used in a PC as well as a Sony Playstation 5. With read speeds up to 7,000 MB/s, games load quickly, and gameplay is seamless and fast. The SSD also features Peripheral Component Interconnect Express (PCIe) bus Gen 4 connectivity, which is two times faster than PCIe Gen 3 and more than 12 times faster than SATA drives.

Watch this video to learn more about the Samsung 980 Pro with Heatsink. And explore Samsung’s full range of award-winning, cutting edge SSDs.