A few weeks ago, I was one of over 100,000 executives who traveled to Barcelona for Mobile World Congress (MWC). It’s a massive event that showcases over 10,000 products from more than 1,000 vendors, which means it’s an incredible opportunity to understand where mobile technology — and in many respects, our society — is heading.

Among the disruptive technology showcased this year, three themes stood out to me:

1. 5G technology enables a flood of new applications: 5G phones are about 200 times faster in transmitting data than today’s 4G devices, which makes all sorts of powerful new applications possible. For example, my daughter is in medical school and currently is on a four-week rotation in rural Colorado, near the Nebraska border. If she needed a consultation and tried to send a detailed MRI scan via her phone, today this would take about 20 minutes. With a 5G technology device, it would take only seconds. In many industries, that sort of speed transforms the ways that professionals function.

Profoundly more advanced applications become feasible with these transmission speeds. For instance, if you’re a technician working on jet airplane equipment, you could now talk to your phone and ask it for detailed schematics or even a list of all the possible causes of the problem you’re trying to diagnose. You could send and receive extremely detailed images, almost at the blink of an eye.

2. The collision of AI, cloud, mobile and … millennials: If you want to understand where technology is heading, watch digital natives, otherwise known as millennials. They demand seamless and persistent access to, well, everything. For example, as soon as a powerful virtual reality tool becomes accessible at work, this generation wants it on their phones and tablets.

They also want more from their devices: advice, assistance and access. As 5G technology becomes more prevalent, this extra bandwidth will allow AI technology to become increasingly robust, and the millennial generation will push their employers to embrace the new applications AI makes possible. Why? Because millennials expect much more from their devices than boomers like me. If you want to keep your business at the forefront, keep your millennial employees excited about the tools you provide them.

Technology Shapes the Way We Work 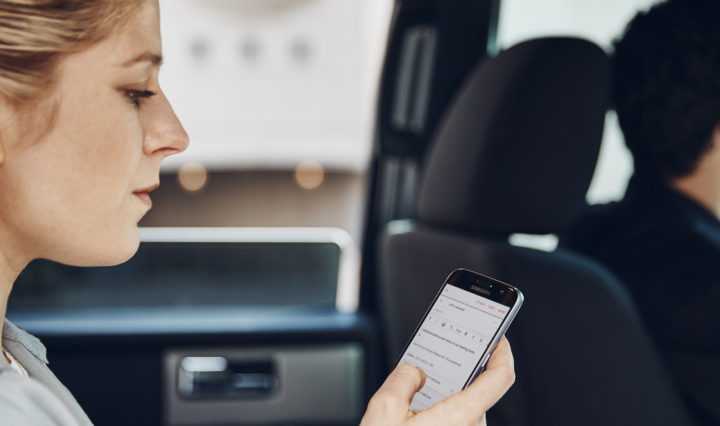 Millennials are paving the way for mobile productivity in the workplace. Download Now

My sense is that we’re at an inflection point more profound than any during my 35-year career. A few years ago, mobile devices were an appendage. Now they are the spinal cord of businesses, with vast amounts of data streaming through them. More importantly, they increasingly provide voice access to AI systems, which means you always have an expert at your side. This possibility is sparking changes so profound, I don’t think that any of us can fully imagine the applications we’ll be using just five years from now.

3. Connected cars: Autonomous and connected cars were everywhere I went at MWC. Ben Phillips of Advertising Age said it best when he wrote that “there are now almost as many cars at MWC as there are new handsets.” VentureBeat was futuristic in their assessment, writing, “When we’re flying our unmanned drones from the backseat of our self-driving car, the notion that mobile once mostly centered around a little gadget we held in our hand is going to seem quaint.”

This year, we just started to see a glimpse of the sort of applications the disruptive technology showcased at MWC will bring. But what is very much real are the partnerships we’ve formed with other organizations, with whom we are co-envisioning the kinds of highly advanced services enabled by new technology developments such as 5G data transfer speeds. The future belongs not to any one company going it alone, but instead to robust partnerships that make giant leaps possible for our business — and our customers.

Other trends that are contributing to the rise of the digital workforce include augmented reality and the Internet of Things.