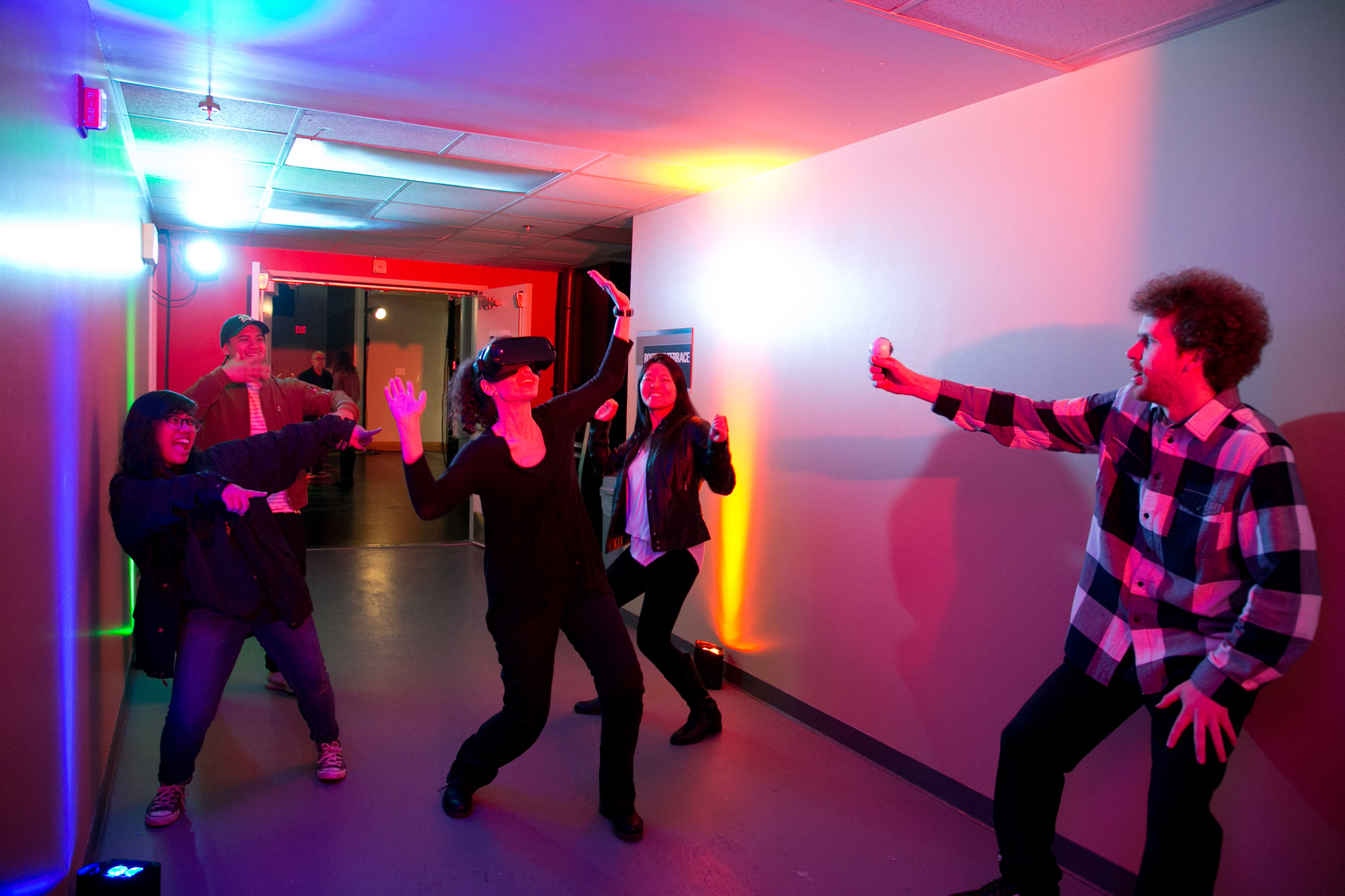 Virtual reality tech is taking on a bigger role in the 3D pedagogy being practiced at the CADRE (Computers in Art, Design, Research, and Education) Laboratory for New Media Art at San Jose State University. Educators and students at the Lab – the second oldest in the country to offer a Digital Media Art (DMA) program – are exploring opportunities to apply commercial 3D technologies in VR settings for purely artistic purposes.

Pivoting off the Bauhaus-influenced and experimental 3D methodology developed by Claudia Hart at the School of the Art Institute of Chicago, SJSU assistant professor and CADRE Media Lab area coordinator, Andrew Blanton focuses on what it means to develop an artistic practice using virtual reality tech sculpting tools.

“We need to think abstractly about this technology and how to use it as art,” Blanton says.

BFA and MFA students in the Digital Media Art program at SJSU are dedicated to that goal, with approximately one or two of their VR installations appearing weekly in the school’s Virtual Gallery during the semester.

“The students are so excited about it, and we are ramping up to develop more resources around our VR practice,” says Blanton. “We want to help students to understand what it means to build art objects in 3D and compile those 3D-sculpted objects for viewing on VR devices, and to get them thinking about the pipeline of constructing any space they could possibly want with virtual galleries.”

One of those excited students is Tyler Stannard, who recently exhibited his Virtual Landscapes VR project at SJSU and also at the Paseo Public Prototyping Challenge. His interest in using VR in his art is tied to his interest in video games, which, just like virtual reality tech, have an element of responsiveness that helps create a deeply engaging experience.

“I enjoy making experiences in art that are extremely interactive and so create immersion,” he says.

Stannard describes Virtual Landscapes as being in some sense a non-goal based video game, with a focus on letting users explore a world without boundaries — one that isn’t exactly like the real world but the background is so well-fabricated that it’s easy to believe in its reality. Equipped with a VR headset and controllers, visitors can juggle rocks, jump into water or just marvel at the skyscape Stannard developed using a commercial 3D video game engine. “I wanted to see what people would gravitate to during the experience, and create something everyone could enjoy,” he says.

That includes people who don’t particularly like video games and might be considered a little outside the demographic — like his parents, who agreed to help Stannard test out his VR project during development. They became so immersed in the experience that they started walking into walls in his room, which boosted Stannard’s confidence that he was achieving his artistic vision.

“I want to create art out of video games, not just make the next ‘Call of Duty’,” he says. “What I love … is to use art as a meditative process and one of exploration,” and he sees how VR can really push the boundaries in these respects. He’s eager to be a part of that, already contemplating how his artistic efforts might leverage multiplayer VR scenarios.

Blanton agrees that artists will have to wrestle with the issue of how to let audiences participate in artistic VR experiences without being isolated by the technology. “A lot of technology is about minimizing interpersonal communications and I hope we can find ways for these technologies to help us feel more engaged with each other,” he explains. There may be additional benefits in this area by breaking the boundaries of the VR headset, another idea that excites Stannard.

“A lot of technology is about minimizing interpersonal communications and I hope we can find ways for these technologies to help us feel more engaged with each other.”

For now, though, the expanding market of mobile VR headsets that work with individuals’ smartphones has made it easier for artists to create for the medium as well as for visitors to consume it. Still, accessibility may be a challenge for the digital have-nots, Blanton says, which is something the community will have to consider as these installations become more mainstream artistic events.

He’s also looking forward to the industry solving some technical issues, such as enabling faster rendering on VR devices. This would help avoid dropping frame rates that could cause viewer discomfort.

“VR is truly immersive and transports you to a completely different space. We have to find ways to celebrate that aspect of the technology.” – Andrew Blanton, SJSU assistant professor and CADRE Media Lab area coordinator

That said, there’s so much potential around this integrated technology in the classroom that’s exciting for staff and students at SJSU, Blanton says. That includes using this new form of digital art as a vessel to help teach other disciplines, such as engineering. To whatever ends students will work with VR sculpting and creative coding — art, engineering, design, rapid prototyping or other technical or professional vocations — the important thing is to encourage them to take abstract and different approaches to using the technology.

“How can we intervene to break previous paradigms to create something new and innovative in this space?” Blanton asks. “VR is truly immersive and transports you to a completely different space. We have to find ways to celebrate that aspect of the technology.”

Learn about more ways to use integrated technology in the classroom.