Watch this free webinar for tips on achieving ELD compliance — and how it can benefit your fleet.

What Does the Next Generation of Drivers Really Want From a Fleet?

It’s a common refrain in the industry: Fleets are in dire need of drivers. Last year, they were short an estimated 60,800, according to the American Trucking Associations, and that number is expected to grow to 160,000 by 2028. Do you have what it takes to retain the drivers you have? How about recruiting new talent?

The average age of a commercial truck driver is 55 years old, according to the Bureau of Labor Statistics. And with more baby boomers retiring from trucking every year, the need to hold onto the drivers you’ve already got — and to attract younger drivers — is becoming more critical.

In the coming years, the trucking industry needs to hire about 90,000 new drivers per year, according to the ATA, and replacing retiring drivers will account for almost half the new drivers that are needed. In other words, there needs to be an active focus not only on attracting millennials, but giving them a reason to stay.

While this next generation of workers wants similar benefits from their employers that their parents’ generation wanted, for fleet management, this requires a close look at the state of the industry and the technologies available.

Competitive pay and benefits will always be a key to attracting and keeping drivers, but it’s also where most companies will look first. Truck driver salaries increased an average of 10 percent last year, according to the National Transportation Institute. The average salary for a truck driver is $1,094 per week, according to the employment website Indeed. And some companies are offering $40,000 to $50,000 driver sign-up bonuses as well as tuition reimbursement for driver training. Throw in a full benefits package like a 401(k) retirement plan; comprehensive healthcare that includes medical, dental and vision coverage; as well as paid time off, and truck driving is even more lucrative than the $69,000 median income of millennial households, according to the Pew Research Center.

So how can a fleet differentiate themselves outside of the salary war to attract and keep their talent? Here are five additional ways to gain a competitive edge when recruiting new drivers.

New truck drivers usually have one point of reference when they make the move to trucks: their personal vehicles. And those personal vehicles come with more bells and whistles today than ever before. In addition to automatic transmissions, today’s cars are incorporating more semiautonomous features, such as automatic emergency braking and cameras that can help them stay in lanes.

These advanced collision mitigation systems are especially valuable for recruiting new truck drivers. According to the Federal Motor Carrier Safety Administration, heavy trucks and buses make up just 4 percent of the country’s registered vehicles, but they account for 9 percent of total miles driven and 7 percent of accidents, as well as over 11 percent of traffic fatalities.

It doesn’t matter the profession. Employees want to feel they are valued for their hard work. It’s human nature. But for truckers in particular, who spend so much time alone on the road, they also want to be recognized as individuals — to be thought of as a person first, not just a truck delivering product. So if a driver does a good job, tell him (or her). If a driver has an idea or suggestion, listen. Many fleets now have monthly recognition and awards programs to acknowledge their drivers’ good safety records ad professionalism. Others offer learning management systems through technology to help drivers expand their skillset, and others provide mentoring programs that pair new and experienced drivers, to help younger drivers form good relationships with their co-workers and feel more connected with their companies overall.

How to Modernize Fleet Management 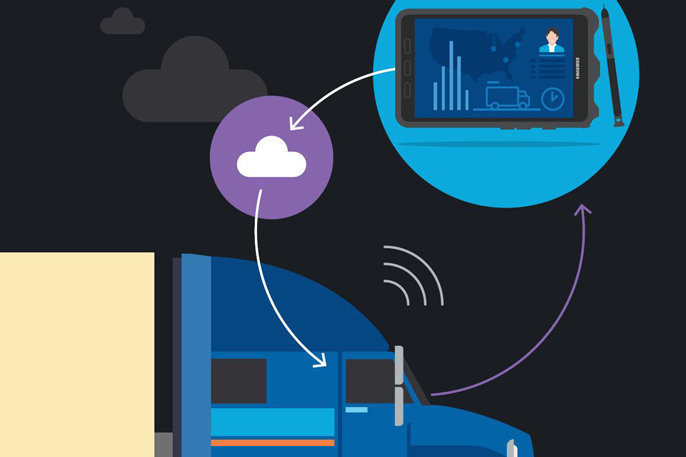 Get your free guide to improving fleet performance and profitability with in-cab mobile technology. Download Now

The fleets that are most successful at retaining drivers are the ones that treat them with respect — who understand drivers are people who have full lives both on and off the road. So be sure your driver managers get to know the people who are giving it their all behind the wheel. If they’re celebrating a birthday or wedding anniversary or a kid’s high school graduation, congratulate them. And if they’re having difficulties with anything they’re encountering while doing their job, try to help.

Drivers who spend so much time on the road really value their time at home. So it can be frustrating when schedules are unpredictable or drivers are suddenly called back into service before expected. For drivers with families, a consistent schedule is often more important than making the highest salary.

Balancing professional and personal life is always tricky, but it’s especially challenging when a driver is gone for two to three weeks at a time. Fleets that allow flexibility in how much time a driver spends on a single stretch — in exchange for guaranteed, predictable days at home — are in a better position to recruit and retain drivers.

For long-haul truckers, their cab is their home away from home. Think about what most people enjoy in a stationary work environment: a place that is spacious and comfortable, co-workers who are friendly and communicative, an overall work system that is intuitive and easy to use. The same formula applies to the in-cab experience of a truck.

What they don’t want is to waste time. A great in-cab communications system with good mounting and connectivity is often key.

More than 90 percent of millennials own smartphones, compared with 67 percent of baby boomers, according to Pew Research Center. Touch screens are so familiar for these so-called digital natives that this type of advanced in-cab technology is becoming an increasingly critical consideration for fleets that are hoping to retain or recruit younger truck drivers. Paper Transport, a freight company based in Green Bay, Wisconsin, knows this firsthand. When attempting to recruit new talent, “potential drivers would take one look at the equipment in the cab and walk away from a job offer,” according to a recently published case study. It was the dated in-cab communications system that turned them off.

That’s why Paper Transport now updates its tractors every five years, and also upgraded its in-cab technology to include Bluetooth radios and ELD tablets that let them automatically log their hours of service, figure out their best routes, communicate directly with other drivers and even play games — all through a single device, just like they’re used to doing with their personal phones. Since switching to ELD tablets, the company says its driver engagement has increased almost fourfold and that drivers now voluntarily learn from training videos instead of having to be persuaded.

When it comes to retaining and recruiting drivers, technology is becoming increasingly important, especially for younger drivers. And with millennials expected to become a larger percentage of the truck driver community in the coming years, the fleets that are most adept at incorporating technology that is easy to use and that seamlessly connects their professional and personal lives are in the best position to capture this burgeoning talent pool.

See what connected fleet solutions are available to help you meet company and driver needs. Then, listen in on a discussion of how mobile technology can reduce operating costs and improve driver retention, and download our free guide to going mobile and modernizing fleet technology.